Joey Franz, a junior in physics at Missouri S&T with an emphasis in secondary education, combines his passions for physics and working with kids through volunteering as a high school robotics competition mentor.

“Physics is the platform for many aspects of engineering,” says Franz. “The torques and forces that hold structures together help describe the universe around us.”

Franz uses his physics aptitude to help high school students build and operate robotic inventions for competitive meets with games that turn the curriculum of science, technology, engineering and math (STEM) into a sport, touting the kinds of playoffs you’d find in any well-known athletic league.

He draws on his high school experience with FIRST (For Inspiration and Recognition of Science and Technology) — an international, non-profit youth organization that operates robotics competitions — to give back to others the life direction he says he’s gained from the program.

“The robots build me,” Franz says. “Being involved in FIRST goes beyond just building robots. It puts an emphasis on your local community through teams doing outreach. It also puts an emphasis on building the students. I’ve seen kids who could barely talk at the start of the program transform into confident people who can give a full presentation in front of judges without breaking a sweat.”

This past spring, Franz donated 400 hours during a six-week period to mentor Rolla High School’s 25-member robotics competition team, “10Factorial,” for its premier participation in the Greater Kansas City Regionals FIRST competition. He helped the team create its financial, community outreach and safety programs, and to apply basic physics and mechanics to their robotic inventions. Those efforts paid off when 10 Factorial won Kansas City’s Rookie All Star Award, which qualified them to compete in the FIRST World Championships in Houston—a goal the team had set for itself. 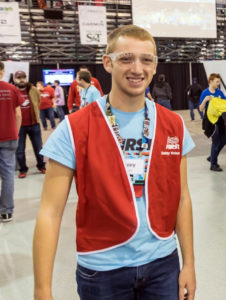 Franz also works as a safety advisor at robotics competitions.

Franz volunteered at 10 robotics competitions in the last academic year, helping out at all four levels of FIRST robotics competitive meets where students from kindergarten to 12th grade progress, gaining experience at each level. Franz worked as a judge, master of ceremonies assistant and safety advisor at the competitions.

“Joey is one of the most passionate volunteers I have ever had the honor to work with, at any event. He is a hard worker, eager to ‘dive in’ and happy to help with any task,” says Linda Bright, event manager at Missouri S&T. “He has embraced FIRST robotics by becoming involved in all aspects of the organization. Every volunteer coordinator should have a ‘Joey Franz’ on their roster.”

Franz loves working with kids. During the summer, he works as a counselor at full-inclusion YMCA camps for kids ages 7 – 17 from all socio-economic backgrounds. After working two summers as a cabin counselor, he’s now a unit director who oversees the counselors and helps run the outdoor survival, leaders-in-training and equestrian programs.

“Joey’s generosity and service have been a wonderful contribution to all the Rolla K-12 robotics teams. They consider him one of their coaches,” says Kelly Carter, interim chair for Missouri S&T’s teacher education and certification department. “I am confident Joey will be successful in whatever career path he chooses.”