A new book released today (May 15, 2018), A&R Pioneers: Architects of American Roots Music on Record, provides the first full-length account of the men and women who shaped the creation of what is now known as American roots music.

The book also shows how they established the job of today’s record producers often known as “A&R” men— employees of the artists-and-repertoire division at a record label who scout for talent and material, and oversee the artistic development of recording artists. 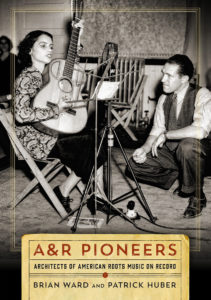 Co-authored by Dr. Patrick Huber, professor of history at Missouri University of Science and Technology, and Dr. Brian Ward, professor of American Studies at Northumbria University in Newcastle upon Tyne, the book represents nearly six years of research and writing. It is jointly published by Vanderbilt University Press and the Country Music Foundation Press.

“Until A&R Pioneers, no one had tackled a collective biography of the more than 100 individuals — mainly men — who worked behind the scenes to discover artists, supervise and produce their recordings, and, in the process, often exploit these artists,” says Huber. “During the 1920s and ’30s, A&R representatives defined and shaped the new genres of commercially recorded ‘race’ and ‘hillbilly’ music.  In effect, they not only helped construct the canon of American roots music, but they also established the basic practices of the modern sound-recording industry.”

“There’s resistance among some scholars and fans to seeing the blues and country music of this era as the product of a modern commercial enterprise,” says Huber. “Some people prefer to view this music as pure, unmediated folk art that, somehow, just magically appeared on phonograph records. But the success of this music, and, in fact, its very existence, was due to an international business enterprise at the heart of which were A&R men and women. Many of them admitted they had a ‘tin ear,’ but they were good at identifying promising talent and material, and understanding the record market.”

Many unscrupulous A&R men took advantage of the artists they worked with, pressuring them to sign over the copyrights to their original songs and swindling them out of their rightful royalties, says Huber, who notes that in today’s music business, artists are much more in charge of their careers and aware of what their music is worth.

Huber is the author or editor of five books, including the prize-winning Linthead Stomp: The Creation of Country Music in the Piedmont South published in 2008 and The Hank Williams Reader published in 2014. Co-author Ward has published eight books, among them the award-winning Just My Soul Responding: Rhythm and Blues, Black Consciousness, and Race Relations and Radio and the Struggle for Civil Rights in the South.

The research for A&R Pioneers was partially funded by a grant from the University of Missouri Research Board.

The book is available at amzn.to/2IwliDH.