Daniel Roesch, a graduating senior in ceramic engineering with minors in chemistry and studio art, has earned Missouri S&T’s 2018 Renaissance Student Award. S&T ‘s College of Arts, Sciences, and Business and the arts, languages and philosophy department presented the award, which includes a $1,000 prize, in a ceremony on campus today at the Havener Center.

The award is named after the term “Renaissance person,” originally coined to describe the great philosophers of the Renaissance and Enlightenment eras who were experts in numerous varied fields. The most well-known example is Leonardo da Vinci, who was a painter, sculptor, musician, mathematician, inventor and writer. 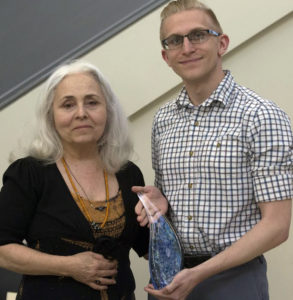 S&T faculty say Roesch exemplifies the characteristics of a Renaissance student through his engagement in a breadth of subjects in addition to his engineering major, including glass blowing, ceramics, sculpture, calligraphy, Chinese art history, copper forming and working as a theatre technician.

“Daniel seeks mastery in all he does and accomplishes it with little pomp,” states Luce Myers, assistant professor of arts, languages and philosophy. “In my art classes, I could always depend on him to set a high bar for refinement, originality and exploration of techniques and materials. Daniel marries art, science and technology with a seamless aesthetic of simplicity and elegance.”

“Of all the students I have interacted with in the last 10 years, Daniel stands out as a student with much greater curiosity and breadth of interests than others,” says Dr. Mary Reidmeyer, teaching professor of ceramic engineering. “His interest and skills in a variety of art forms contribute to his creativity in the Hot Glass Shop, and teaching other students the skills he has mastered.”

“Daniel has been working with the theatre program for his entire S&T career. He works on building sets, lighting, sound and props and as a ‘go to’ person for whatever needs to be done. I consider him a strong part of our program,” says Dr. Jeanne Stanley, associate professor of theatre. Roesch has also been involved in the Rolla community by working with the Ozark Actors Theater as a light board operator and backstage technician in many productions.

Roesch has been listed on the honor roll every semester during his time at S&T. He has held positions in the W.T. Schrenk Society for the advancement of chemistry; is alumni chair for Alpha Psi Omega, the theater honor society; and is a member of Keramos, the ceramic and material science honor society, Kappa Mu Epsilon, the mathematics honor society and Gaffer’s Guild, a student-run glassblowing organization. 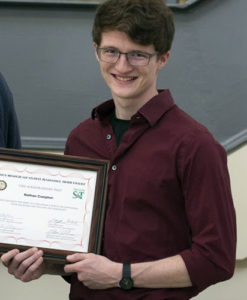 Compton has participated in the Miner Challenge Alternative Break Program for several years. Recently, he was the marketing mentor where he managed the logistics and publicity for the group’s fundraising efforts. He has also been a leader of S&T’s Martin Luther King and Gonzo Gives Back days of service.

Compton has participated in S&T choirs and the Rolla Choral Arts Society. He has been a vocal soloist in several concerts, held offices in the choir and was a founding member of S&T’s Performing Arts Council. Compton serves as the Minor League Theatre Players assistant musical director for the musical, “Forbidden Broadway,” and is a cast member.

Compton has been on the honor roll every semester during his time at S&T.

On April 30, 2018. Posted in College of Arts, Sciences, and Business, College of Engineering and Computing, Department of Arts, Languages and Philosophy, Materials Science and Engineering, Mechanical & Aerospace Engineering, People