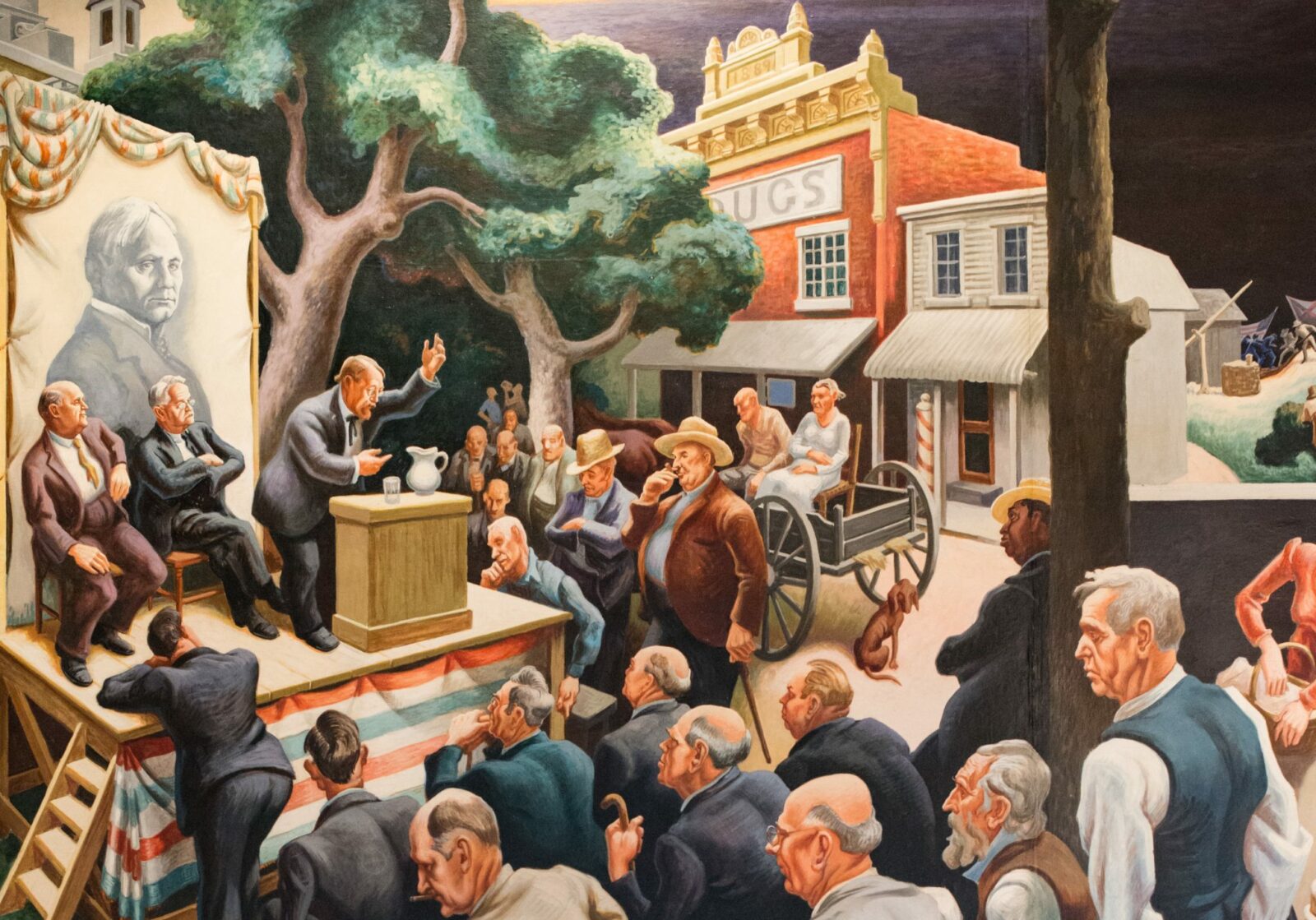 The crowd at the political speech in Thomas Hart Benton’s mural A Social History of the State of Missouri. 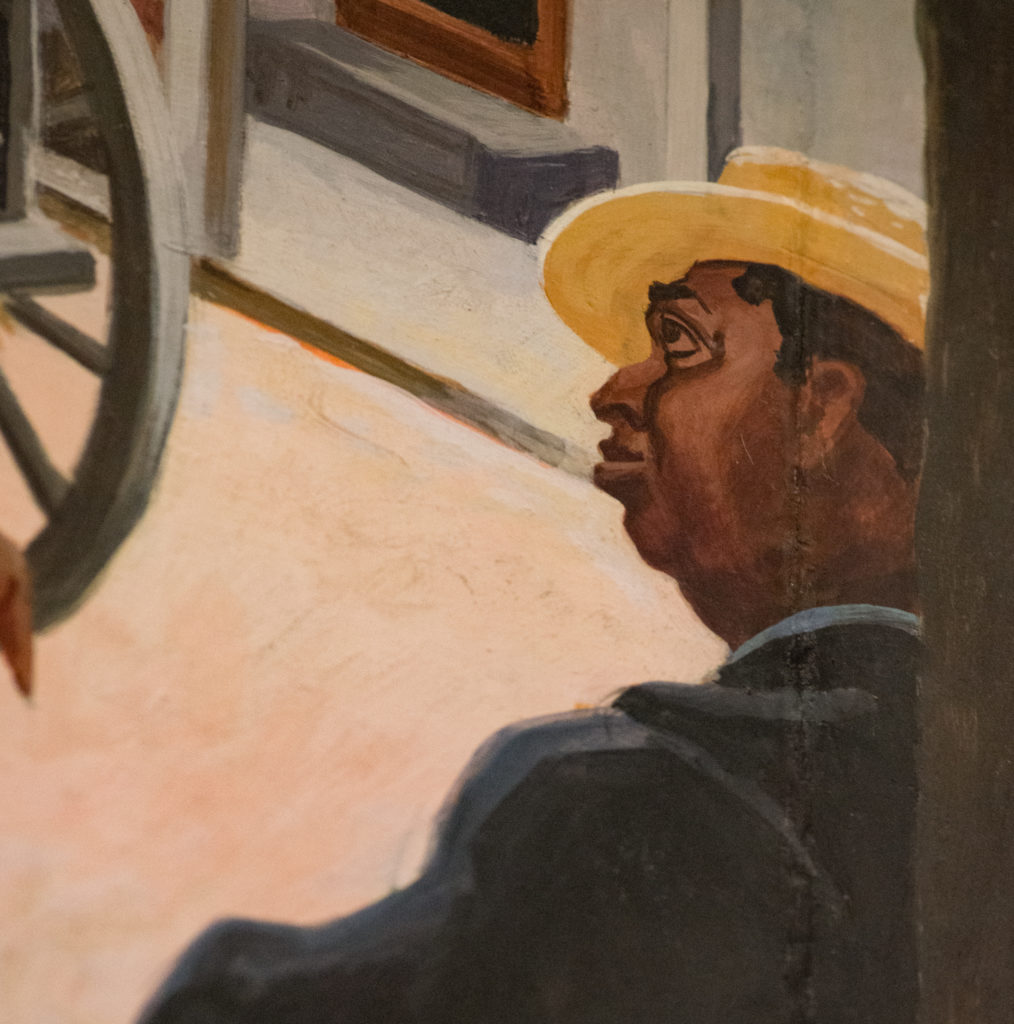 Dr. James Bogan believes the figure is based on Jordan Chambers, a politically powerful man in St. Louis at the time.

Benton’s A Social History of the State of Missouri adorns the walls of the Missouri House of Representatives Lounge in Jefferson City. One man, leaning on a tree and listening to a political speech, was the subject of an important story in Benton’s memoir on the mural’s creation, but he has remained anonymous until now.

“In 1992, we released Tom Benton’s Missouri, a documentary about the mural, and the identity of the mystery man defied our research at the time,” says Bogan, Curators’ Distinguished Teaching Professor emeritus of art history and film at Missouri University of Science and Technology. “When I retired a few years ago, I returned to what amounted to an art historical cold case file on a missing person.”

Benton’s memoir tells a story of former Missouri Gov. Guy Park calling the artist into his office and telling him that a St. Louis politician he called the “most important black voter ‘getouter’ in the town” objected to Benton’s portrayal of black people, especially the graphic images depicting slavery. Benton did not want to erase that piece of Missouri history from the painting. Instead, he showed the politician the mural and explained how he would show the progress of black people in Missouri, overcoming misfortune and rising to political importance. Benton invited him to be the model for a figure, leaning on a tree at a distance. Benton says the man agreed, and the rest of the mural remained unchanged.

Bogan spent the last couple of years combing through historical photos and archives to solve the mystery of the man’s identity. An inquiry to the St. Louis Post-Dispatch yielded an obituary of Jordan Chambers, who fit the profile of Benton’s description of the man.

“Getting the obituary on Jordan Chambers is what convinced me that this was the guy,” says Bogan.  “The obituary calls him the ‘Negro mayor of St. Louis,’ and candidates at all levels of government wanted his support. Also, he was noted for wearing a ‘signature’ white Stetson hat, just like the fellow in the mural.”

“This man was described as the boss Pendergast of the time in St. Louis. His inclusion in the mural shows he’s working across the state in powerful social and political arenas,” says Bob Priddy, president of the State Historical Society of Missouri. “The figure is a critical component. It helps us better understand black history in the backdrop of Missouri politics of the time.”

Priddy says the inclusion of this African American figure showed the advances that black people had made in the state up until the 1930s. The image is also one of the few African Americans portrayed in any art in the Missouri Capitol in that era. Benton experts say such illustrations of larger social issues are part of the endurance of his work.

“Often with Benton, one little part of his murals is quite illuminating about a whole aspect of American life,” says Benton expert Dr. Henry Adams of Case Western Reserve University. “Jordan Chambers was clearly the beginning of African Americans playing a powerful role in American politics.”

Adams hopes more photos of Chambers will emerge showing him at the same angle as portrayed in the painting, but both Priddy and Adams believe the circumstantial evidence around Bogan’s discovery is strong.

“The inclusion of Jordan Chambers was inadvertently prophetic for Missouri political history in that it was Chambers who delivered the critical vote for Harry Truman for democratic nomination to the Senate in the 1940,” Bogan says. “Benton did indeed paint the future into his historical mural.”

In the meantime, Bogan’s research could help a new generation of Missourians better understand their past.

Find the full article of Bogan’s research about Benton’s encounter with Jordan Chambers, plus a free download of Bogan’s documentary Tom Benton’s Missouri, on the University of Missouri Extension website at:  http://extension.missouri.edu/tombenton/mr-chambers.aspx