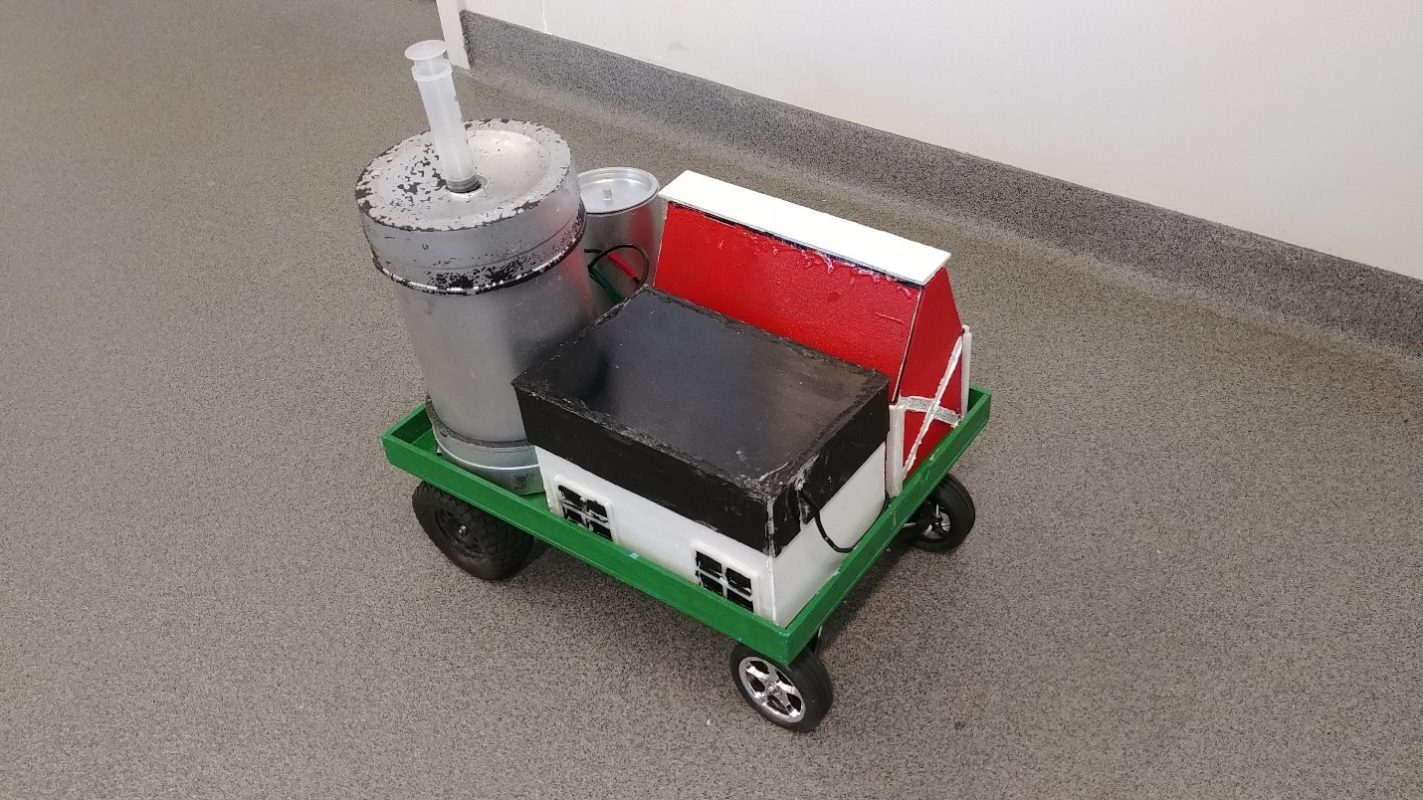 “The Farm” for this year’s competition. Photo submitted.

Two groups from Missouri S&T have built autonomous vehicles powered by chemical reactions to compete in a regional Chem-E-Car competition.

Missouri S&T’s Chem-E-Car Team will compete as two teams Friday, April 20, in Stillwater, Oklahoma, during the American Institute of Chemical Engineers (AIChE) Student Conference. The competition challenges teams to design and build a shoebox-sized car that uses a chemical reaction to travel a target distance while carrying a pre-established amount of weight.

At the competition, all vehicles must travel a randomly set distance between 15 and 30 meters. The final destination is randomized to make team members adapt and perform calculations in a short period of time. Teams must calculate the average velocity of their vehicle and decide what volume of the chemical solution would be required to activate the battery power. The car closest to the finish line at the end of the race will win and qualify for the national competition.

One S&T team’s car is named “Cinnamaldehyde Toast Crunch,” a pun based on the stopping mechanism of the car and a popular breakfast cereal. The car is powered by a zinc-air battery, where solid oxidizing reacts in the presence of oxygen to power the car. It stops by using a cinnamaldehyde clock reaction that reacts with acetone in the presence of a base.

Another S&T team’s car, “The Farm,” stops using a reaction called the “chemical chameleon.” In the reaction, a solution of potassium permanganate reacts with glucose in a basic solution to produce a color change. The chameleon reaction can be used as a timer when paired with an LED and a photoresistor, which stops the car.

The Chem-E-Car Team is one of 18 student-run teams in Missouri S&T’s Student Design and Experiential Learning Center (SDELC). The SDELC, housed in the Kummer Student Design Center, provides teams with computer design laboratories, a manufacturing shop, office space and logistical support. Design teams mirror small start-up companies that plan large-scale projects, organize into departments, raise funds, communicate their ideas and solve open-ended design challenges. Almost every team competes annually at an event against other collegiate teams from around the country and the world. For more information about the teams, visit design.mst.edu.