After 46 years of teaching and research in the physics department at Missouri S&T, Dr. Barbara N. Hale has retired.

“Dr. Hale inspired generations of students,” says Dr. Thomas Vojta, chair and Curators’ Distinguished Professor of physics. “She still is a vital part of our physics family, and we hope to see her often in the department.” 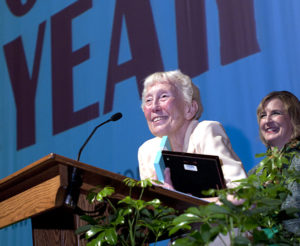 In 1973, Hale was one of the first two women to join the Missouri S&T physics faculty. She began as assistant professor, making a major change in her field of study, which had been high-energy particle physics, to join the Graduate Center for Cloud Physics. That center eventually became the Cloud and Aerosol Science Laboratory where she was promoted from associate professor and senior research investigator to professor and senior investigator. She became an expert in nucleation theory with an emphasis on theories of water and ice cluster formation.

“Dr. Hale’s work has led to over 40 publications, and her articles made truly important contributions to the field,” says Dr. Dan Waddill, physics professor and former chair. “For example, the success of her scaled model of nucleation is one of the most significant contributions to the understanding of this phenomenon in the last 30 years. At S&T, her research generated almost $1 million in external support.”

Hale excelled as an educator, teaching a full range of physics courses, from introductory undergraduate classes to supervising doctoral students. She received numerous faculty excellence awards. In 2013, Hale was named Missouri S&T Woman of the Year in recognition of her efforts to improve the campus environment for women and minorities. “Dr. Hale is an outstanding educator,” wrote one of her nominators for the award. “She has been an outspoken advocate for the faculty and for her students.”

Hale currently serves as faculty advisor for the Eta Kappa chapter of Chi Omega, a service she has performed since 1979. In 2014, she received the fraternity’s lifetime service award.

The physics department honored Hale with a retirement celebration in early March.