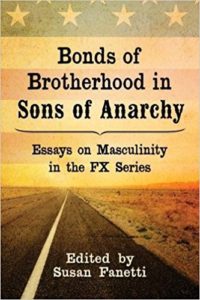 Motorcycle clubs, popular in American culture since the 1970s, bear striking resemblance to organized religion in both rituals and language, says Dr. Jossalyn Larson, assistant teaching professor of English and technical communication at Missouri S&T. Larson expands on that theory in a book chapter to be published this spring.

Larson’s chapter, “Motorcycle Monasticism: Masculine Religiosity in MC Culture,” compares religious traditions to motorcycle club rituals, and draws on her own experiences as a member of a motorcycle club. The chapter is part of a book titled “The Bonds of Brotherhood: Gender and Masculinity in Sons of Anarchy,” by Susan Fanetti. The book uses the 2008 FX show “Sons of Anarchy” as a framework. The program featured the relationships and drama of a family immersed in motorcycle culture. The book will be published by McFarland Press on Thursday, March 8.

“I was interested in this project because my husband John and I have been riding with motorcycle clubs for a little over 10 years now, so we know the culture pretty well,” Larson says.

“I’ve always found it interesting that motorcycle clubs use religious language in their organizational rites and practices,” she says. “For instance, they call their club meetings ‘church,’ and they have very strict rules surrounding sacred objects. The bike is a sacred object, for example, and no man or woman is allowed to touch another man’s bike without his permission.”

From her experience as a member of motorcycle club, Larson has discovered more sources of religious traditions in motorcycle club culture over the years.

Motorcycle clubs have existed since the 1950s, but did not become popular until the 1970s. Larson was interested to learn what changed in those 20 years.

“Since the 1970s, men have also been leaving the church and religious practice at an increasing rate,” Larson says. “So I was curious why are men leaving organized religion, but they are being attracted to motorcycle clubs, which are organized just like a religious sect?”

In her chapter Larson explores the possible connection and draws several conclusions.

“One possible reason men leave the church is because the church will eventually ask them to move beyond idealizing the fundamental values of the religion in order to apply those values in daily practice, but motorcycle clubs allow men to more-or-less worship the fundamental beliefs of their clubs without really having to practice those ideals in their daily lives,” she says.

“Studies have found that ‘masculinity’ can be characterized by a number of traits, but the ones most relevant to this study are attraction to fundamentalism, a preference for violence over emotional expression, and power over women,” she says. “Of course this does not characterize all men, but these are the traits most common to the demographic that is abandoning religious practice, and they are common to the demographic that makes up the core of motorcycle club members.”

On February 26, 2018. Posted in CASB Research, College of Arts, Sciences, and Business, Research