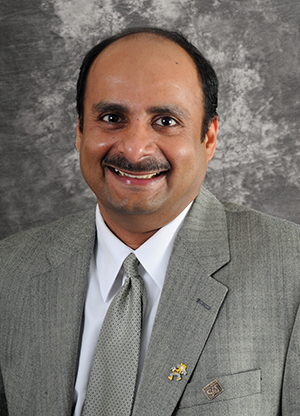 “He is a strong advocate for graduate students on issues that impact their well-being such as mentorship, workload, funding, safety, diversity and inclusion, student outcomes, and professional development,” Marley says. “During his 10-year tenure as vice provost of graduate studies, he laid down solid groundwork for creating a vibrant graduate education culture at Missouri S&T. We appreciate Dr. Allada’s distinguished and exceptional service, dedication to this institution, and collaborative, team-based approach. Under his dynamic stewardship, graduate education at S&T is now well-aligned with the university’s strategic goals.”

Marley adds that Allada’s “sharp, laser-like student-centric focus” and emphasis on collaboration are “the hallmarks of Dr. Allada’s tenure.”

“Dr. Allada and his team have worked hard to strengthen diversity and inclusion networks on our campus and developed innovative initiatives for professional development, campus internationalization, and graduate recruitment,” Marley says. “I am thankful that Dr. Allada has agreed to join my office team to help with the smooth transition of the office of graduate studies and work with me on special projects.”

“The most gratifying achievement of my tenure as vice provost of graduate studies has been the numerous thank you notes and words of gratitude that my staff and I received from our students for making a positive difference during their stay at S&T,” Allada says. “Our guiding mantra has been to always keep our students’ interest front and center. I am thankful to my colleagues and partners who helped us achieve outstanding success in our student-centric graduate education,” including the Council of Graduate Coordinators and Staff, Council of Graduate Students (CGS) and the Provost’s Leadership Cabinet. “It has been a privilege to supervise and nurture a high-performing graduate studies team,” Allada says. “We created an office culture that is welcoming, respectful and helpful to all stakeholders.”

A decade of accomplishments

The office of graduate studies was formed in 2007 as part of a campus reorganization, and Allada was named vice provost for graduate studies to oversee the new operation. Under his leadership, the office provided new programming to meet the demands of the fast growth in graduate enrollment. The office and its staff were recognized for providing outstanding student services, attaining a 93 percent student satisfaction rate for technical editing services and a 98 percent student satisfaction rate with services of the office’s staff advisors.

Allada also helped secure $3.1 million in recurring state funding through the University of Missouri System to recruit, retain and place more doctoral students at Missouri S&T. As a result, many graduate students are receiving 100 percent tuition and supplemental fee scholarships in addition to their stipends.

Under Allada, the graduate studies office also implemented the Three Minute Thesis (3MT) graduate student competition, beginning in 2015. This competition requires graduate students to explain their theses in under three minutes. Allada also initiated the Graduate Leadership Development Program, which was adopted by the four-campus University of Missouri System. Allada served as faculty advisor for the Council of Graduate Students and will continue to advise that organization in his new role.

As part of a new organizational structure at S&T, a national search is underway for the position of vice chancellor for research and dean of graduate studies.

One thought on “Venkat Allada to help transition graduate studies”