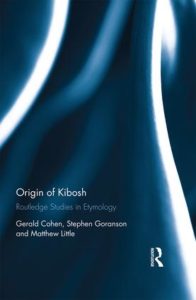 The phrase “put the kibosh on,” meaning “to put an end to,” dates back to an early 19th century poem, but a Cockney chimney sweep brought the phrase to the general public, says Dr. Gerald Cohen, a professor of German and Russian at Missouri University of Science and Technology.

Cohen, who is an expert in etymology, or the study of word origins, co-authored a book on the subject with Dr. Stephen Goranson, a Duke University librarian, and Dr. Matthew Little, associate professor of English at Mississippi State University. The book, titled Origin of Kibosh, is the initial volume of Routledge Studies in Etymology.

“The origin of the expression had long been mysterious,” Cohen says. “Absolutely and totally mysterious. No one had a clue, myself included, although numerous incorrect guesses have been set forth.

“Then in 2009, Matthew Little suggested to me that ‘kibosh’ derives from the fearsome Mideastern whip known as a ‘kurbash,’ and a year later Stephen Goranson, independently and in much greater detail began defending the same suggestion,” Cohen says. “Goranson deserves the lion’s share of credit for solving the origin of the term, even though all three of us wound up doing considerable work on the project.”

Cohen says a key piece of evidence is a poem estimated to be from approximately 1830 titled “Penal Servitude!” The poet used the expression “put on the kibosh” and then explained in the next line “That is, if they was to introduce the lash.”

“Then in 1834, ‘put the kibosh on’ was spoken by a Cockney chimney sweep,” Cohen explains. “He was hauled into court for violating a law prohibiting chimney sweeps from crying out their services in the streets. And although he received a lenient fine, he had a lexically historic outburst in his unmistakable Cockney accent: ‘…it vos the Vigs vot passed this bill, and vot the Duke of Vellington put the kibosh on ‘em for, and sarve ‘em right. It warnt nothing else than this here hact vot floored them.’

“The Whigs, the reform party, passed the bill, which put a crimp in the activities of the chimney sweep, and he was delighted when the Whigs lost the election,” Cohen explains. “The Duke of Wellington, who was briefly Prime Minister in 1834, was considered by the chimney sweep to be the prime agent of the Whigs’ defeat.”

The chimney-sweep story was picked up by at least eight British newspapers throughout the country, bringing “put the kibosh on” to national attention, Cohen says. Charles Dickens was among those who used the phrase.

Cohen offers high praise for his two co-authors. “They’re both extraordinary. This project has been quite an adventure.”