Electronic and Mobile Commerce is one of five classes taught by Carla Bates this fall. Sam O’Keefe/Missouri S&T

Growing up in Rolla, Dr. Carla Bates knew all about the local university and thought about working there, or even earning a degree from there one day. Three degrees later, she’s now in her fourth year on the business and information technology (BIT) faculty and doing her “dream job” of teaching.

Last July, Bates completed her doctoral dissertation, successfully completing her Ph.D. in information sciences and learning technology from the University of Missouri-Columbia. The achievement culminates a career of higher learning that began when she first joined Missouri S&T as a clerk typist in 1989. As soon as she could, she started taking computer science courses on campus but later transferred to management systems, earning her bachelor’s degree in that field from S&T in 1996. She then earned a master’s degree in information science and technology in 2005, becoming the first in her family to get an advanced degree. 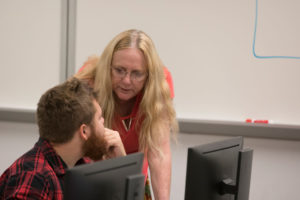 Carla Bates describes herself as the instructor “most likely to answer a student’s email at 3 a.m.” Sam O’Keefe/Missouri S&T

There were some detours along the way. Pursuing a degree while working full time and raising a family – she had two preschool daughters – proved daunting at times. “It was very hard to learn how to manage everything,” Bates says. She fell into the routine of doing homework early in the morning and housework at 1 a.m. That habit of working into the wee hours stuck with her. Today, she describes herself as the instructor “most likely to answer a student’s email at 3 a.m.”

Aside from juggling work, family and school responsibilities, Bates was confronted with a big detour in July 1992 when, at age 27, she was severely injured in a car accident. “I was driving too fast down a gravel road,” she says. “I don’t drive too fast anymore.”

Her injuries included a punctured lung, ruptured spleen, broken femur, broken pelvis and nerve damage, which still affects her right arm today. “They didn’t think I would live” because of her multiple injuries, Bates says.

She lived. And she persevered in her quest to earn a Missouri S&T degree. Over the next three years, while on disability, she went to school full time. After earning her B.S., she returned to S&T as a programmer in the information technology department.

Taking the next step

Working in IT, she and a co-worker, Jerry Hammons, decided to pursue their master’s degrees at that same time. They could help each other out in the process.

Her father, Clarence Bates, also provided encouragement. “He always told me that since I was up there working every day, I might as well be taking classes,” she says.

That advice is similar to what she offers to Missouri S&T staff members today. “I would like to encourage employees to take advantage of the employee education assistance program,” Bates says. “Even if it’s only a class here or there, you never know where it will lead. And I am so excited that Staff Council now offers scholarships to employees.”

Bitten by the teaching bug

It was while working on her master’s that the teaching bug bit. An instructor in the university’s new business program became ill. Bates took over his database course midway through the spring semester.

“That’s when I learned that I loved teaching,” she says. “I decided that this is what I really wanted to do. I didn’t want to program anymore.”

She continued to teach as an adjunct while working in IT and pursuing her Ph.D. from the University of Missouri-Columbia. Even as she persevered with her studies, she dealt with other life struggles, including the death of a brother, a sister, her fiancé and, following his death, another significant other. She also lost two close friends, university employees Corky Humphrey and Larry White, during that time.

“The wreck did not affect my studies as much as the deaths did,” Bates says.

While still working on her doctorate, Bates joined the BIT faculty as an assistant teaching professor in 2014. Over the summer, she successfully defended her dissertation on different learning styles and switched out the nameplate on her door in Fulton Hall from “Carla Bates” to “Carla Bates, Ph.D.”

“This is my dream job,” she says of teaching. “This is what I’ve wanted to do for a long, long time.”

On September 29, 2017. Posted in College of Arts, Sciences, and Business, Department of Business and Information Technology, People