Radio club tunes in to eclipse for science

The Aug. 21 solar eclipse across the United States promises to provide not only a rare visual experience for Americans, but also a rare listening experience for amateur radio operators interested in how the eclipse might affect radio waves in the atmosphere. And members of the Amateur Radio Club at Missouri S&T plan to tune in to the eclipse as part of a global research project. 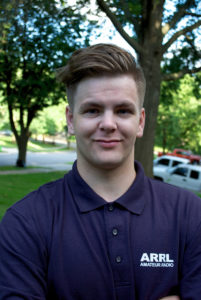 Boots is president of the university’s Amateur Radio Club, W0EEE. He says the eclipse is expected to cause “dramatic changes” in the ionosphere – that part of the atmosphere where neutral atoms and molecules become ionized, or electrically charged, by solar and cosmic radiation. The eclipse offers amateur radio operators a chance to learn about how radio waves propagate under such conditions.

“All around the world,” Boots says, “amateur radio stations like W0EEE will transmit using several different portions of our frequency spectrum to communicate with stations all over the world and accurately log all radio conditions for later analysis.” The S&T Amateur Radio Club plans to set up its antennae on the grounds of Missouri S&T’s student center, the Havener Center, where students, faculty, staff and local residents will gather for a public solar eclipse “watch party” 11 a.m.-3 p.m. Aug. 21.

The data gathered at Rolla and elsewhere will be shared with researchers at Virginia Tech for analysis. The amateur, or “ham,” radio initiative is led by the Ham Radio Citizen Investigation (HamSCI), which will hold a worldwide “Solar Eclipse QSO Party” on eclipse day. “QSO” is ham-speak for “contact,” or an initial transmission and signal report.

“The sun is the most powerful radio in our solar system, and we’ve never had an opportunity to study the effects of a total solar eclipse in the 100 years of radio science,” says Boots.

“We’ve been signing up people from all over the world for this effort,” says Silver, who is a contributing editor to the American Radio Relay League’s journal QST. “I anticipate quite a bit of research activity to come out of this.”

“We obviously didn’t have the equipment to study wave propagation” during those prior total eclipses, Boots says. He and Silver both describe the global experiment is a once-in-a-lifetime opportunity.

“This will probably be the biggest radio wave propagation data set ever assembled, and it’s going to be done mostly by hams,” Silver says.

The global experiment will help advance scientific research and understanding, Boots says, while providing educational opportunities for the amateur radio community and the general public.

Promoting greater understanding of amateur radio is a goal of the S&T Amateur Radio Club. Established in 1931, the organization has more than 90 members, some 30-40 of whom are active, Boots says.

For the eclipse day event, W0EEE will need “all hands on deck” to ensure their antennae is suitably elevated to transmit their signals. An antenna could ascend as high as 60 feet above the ground, depending on its broadcast frequency, Boots says. Transmitting at 14 megahertz will require an antenna of 25 to 30 feet in height, while transmitting at 7 megahertz will require a 50- to 60-foot-tall antenna.

The club will also need plenty of licensed operators on hand to transmit throughout the duration of the experiment, which begins at approximately 9 a.m. Central Daylight Time (CDT). The eclipse begins in the continental United States a couple of hours later, when the shadow of the moon begins to traverse the U.S. from Oregon, and ends at approximately 3:15 p.m. in South Carolina. The experiment will continue until 5 p.m. CDT, according to the HamSCI website.

While Boots and his fellow Missouri S&T students will be operating from the Rolla campus, Silver will have a station set up near Steelville, Missouri, about 30 miles east of Rolla.

This isn’t the first time the amateur radio community has contributed to the advancement of science. Silver notes that in 1923 and 1924, the Naval Research Laboratory enlisted hams to conduct listening tests. Through those tests, the NRL gathered enough data to determine that one layer of the Earth’s ionosphere existed. At the time, scientists called that atmospheric layer the Kennelly-Heaviside Layer, named after Arthur E. Kennelly and Oliver Heaviside, who independently and almost simultaneously predicted its existence in 1902.

This fall, W0EEE plans to offer free testing sessions for anyone interested in obtaining an amateur radio license or upgrading current licenses. Although a student organization, the club is also open to the public. For more information, visit w0eee.mst.edu.

On August 4, 2017. Posted in College of Engineering and Computing, Electrical and Computer Engineering, Research

One thought on “Radio club tunes in to eclipse for science”