After nearly a decade of work, a small Guatemalan village can now count on clean drinking water thanks to a group of student volunteers from Missouri University of Science and Technology.

The Missouri S&T student chapter of Engineers Without Borders (EWB) first traveled to Nahualate, Guatemala, in 2008 as part of a volunteer project to design and build a public water system. On Wednesday, Aug. 2, a delegation from EWB’s S&T chapter is scheduled to return to Central America to mark the project’s official completion. 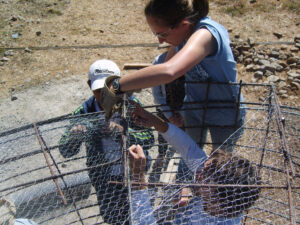 “For about two or three months now, we’ve had water flowing continuously into homes,” says club member Elysia Sparks, a junior chemical engineering major from Rolla. “People are so excited, they were running up to us to pay for their connections (during the most recent trip in November).”

The Guatemalan agricultural community’s 500 households and 3,000 residents had previously relied on shallow wells for their drinking water.

Through the years, the Missouri S&T students, along with mentors drawn from the ranks of faculty as well as professional engineers, typically visited Nahualate once or twice annually to work on such tasks as installing water meters, pressure values and distribution lines; designing and constructing an elevated storage tank; and helping residents obtain public services by navigating the local bureaucracy.

Earlier this year, the student group received $750,000 in private funding– a $500,000 challenge grant from the Houston-based Montana Cahill Foundation and a $250,000 gift from Missouri S&T graduate David Heikkinen and his wife, Ann.

For more on the work of Missouri S&T’s Engineers Without Borders chapter, listen to this audio report by Alan Scher Zagier from the group’s previous trip to Guatemala.

Missouri S&T established its EWB student chapter in 2005, three years after the international organization was founded to help developing communities improve their quality of life through sustainable engineering projects. Teams of S&T students are working on projects in small communities in Bolivia, Guatemala and Honduras.

Other S&T EWB members accompanying Sparks on the Guatemala trip are: