A book by a Missouri University of Science and Technology history professor is the basis for a tactical wartime video game set for release in 2018.

“It’s interesting because the game is partially designed around what I wrote in the book and the history that I covered,” McManus says. “It’s really kind of fun to see my own work come to fruition in this gaming world.”

McManus serves as a historical consultant to the game, and has been play-testing it for over a year. He says he looks at the game as an extension of his own work, and wants to make sure it is as historically accurate as possible.

“What I do when play-testing the different scenarios is really subject the game to rigorous historical inquiry,” he says. “I don’t consider myself to be a big gamer. My focus is on how it looks historically.”

To that end, McManus says the game stays true to his book.

More important to McManus, the game honors the sacrifices and heroism of the Cottonbalers that fought in World War II.

“Respecting the 7th Infantry and the veterans that were there was what was most important to me,” McManus says.

Luke Hughes, CEO of Burden of Command developer Green Tree Games, says he knows how deeply McManus cares about the 7th Infantry. He says that it is of the upmost importance that the game stays true to them.

“The thing I really like about John is that he cares about history, but John really cares about the Cottonbalers,” Hughes says. “He goes to their yearly get-togethers. He always thinks in their best interests. He has a deep respect for them. I think John was thinking the game would be good for the Cottonbalers and for history.”

The game, which will be available for purchase on Steam, a digital platform for video games, follows the Cottonbalers as they travel from North Africa to Sicily and Italy, Southern France, and finally Germany.

“These are missions that actually happened,” McManus says. “It’s the exact kind of situations these guys really dealt with starting in November 1942.”

As its title suggests, Burden of Command asks the player to control a captain in command of a company in the 7th Regiment. Every decision the player makes has an impact on the company, with decisions affecting the morale, stress, experience, trust and respect of the soldiers. Considered a leadership role-playing game (RPG), Burden of Command is single player and turn based. 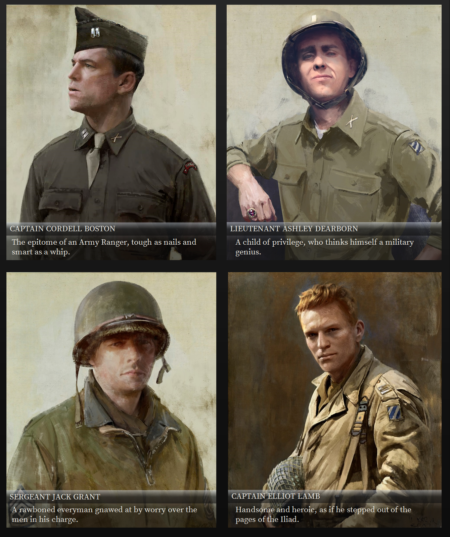 Players control a captain in command of a company in the 7th Regiment.

“I think it’s a really good opportunity to look at the leading infantry regiment in the Army during World War II and get a sense of what that world of combat was like for them and the moral dilemmas that you would face as a soldier or a commander,” McManus says. “The game can be stressful in that sense because it’s very real. It’s not a ‘shoot ‘em up’ game. It’s more cerebral that that. The violence happens and it matters, because your decisions have consequences.”

Although the captain controlled by the player is fictional, the player does interact with soldiers who actually fought in World War II.

“(The characters controlled by the player) are not real-life people, but sometimes they interact with real-life people,” says McManus. “For example, the captain whom you play as has a lot of interactions with his battalion commander, a guy named John Heintges, who really was a battalion commander in Sicily and Italy and throughout much of the war and eventually commanded the whole (Cottonbaler) regiment later on.”

Hughes came up with the idea for Burden of Command while working as an artificial intelligence expert in Silicon Valley. He was also inspired by the memory and legacy of his father, Dr. Thomas Parke Hughes, a foremost academic expert in the history of technology and WWII veteran.

“I had the goal of developing a historically substantive game, or rather experience, based on what it’s like to lead an infantry company in World War II,” Hughes, an admitted history buff, says. “You can think of Band of Brothers or any World War II biography you’ve read, and it’s in the spirit of that.”

But unlike Band of Brothers, Hughes didn’t want to follow the journey of American soldiers at D-Day. So he did some research and came across the Cottonbalers, who have fought in every American war since the War of 1812.

“I needed a substantive, historically accurate story with details right down to the infantry members,” Hughes says. “That led me pretty obviously to John’s fine book.”

Considered a leadership role-playing game (RPG), Burden of Command is single player and turn based.

Hughes emailed McManus his pitch and the two have been collaborating ever since.

“He saw that I wanted to have at least some degree of authenticity,” Hughes says about McManus. “He also saw the game as a way to reach younger people.”

Indeed, McManus envisions using the game in his classes at Missouri S&T.

“I notice that the students that are interested in military history are sometimes first exposed to history through video games,” McManus says. “It’s cool because these games can excite their interest, but it can also be a little bit troubling if the history is wrong.”

McManus says that Hughes and the Green Tree team have kept him highly involved in the development of the game from the very beginning.

“I’ve had tremendous input all along the way, and that’s the way it ought to be,” he says.

For his part, Hughes says that McManus is always easy to get a hold of if the Green Tree team has any questions.

“John’s such a good guy,” says Hughes. “He’s always there. He’s always supportive. If you have questions, he’s there to answer them. He’s generally a kind, supportive guy with a lot of knowledge. He’s been tremendous.”

On July 20, 2017. Posted in Academics & Faculty, College of Arts, Sciences, and Business, Department of History and Political Science, News, People