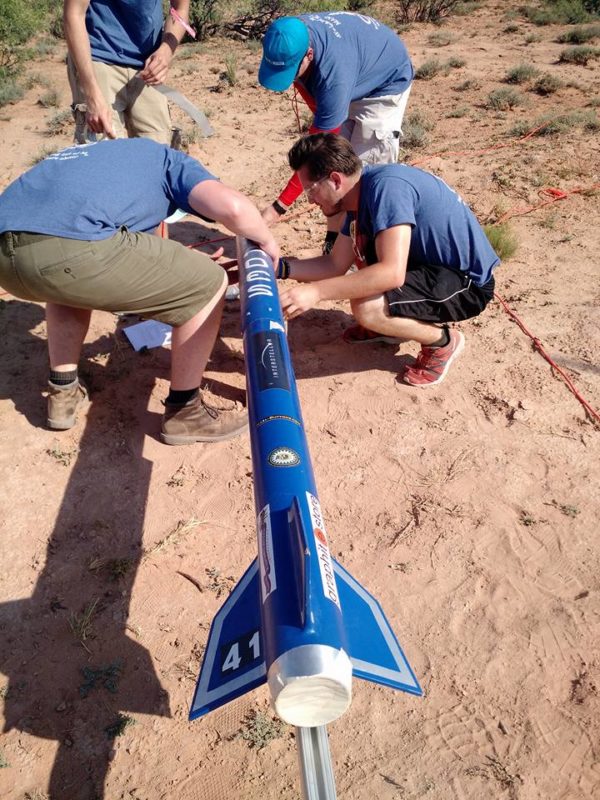 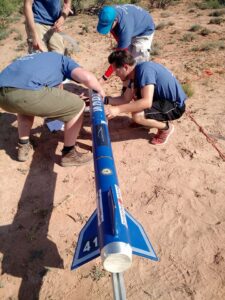 Missouri S&T’s Rocket Design Team had two goals. The first goal was to reach the team’s projected altitude of 8,873 feet and then recover the rocket by deploying high-drag pull-down apex parachutes. The team launched its rocket, dubbed Hades, 8,772 feet into the air over Las Cruces, only 101 feet below its projected altitude. The lower section of Missouri S&T’s rocket separated from the main parachute and landed at 97 feet per second with only cosmetic damage.

Missouri S&T’s second goal was to test equipment for the team’s future designs. The students designed and built an avionic system to measure the rocket’s acceleration, spin, outside air pressure and parachute deployment time, and transmit that data to a telemetry system that reached team members on the ground. The data transfer was successful, which will allow the team to build much larger rockets for future competitions without worrying about onboard telemetry systems.

Hades is 96 inches tall and 4.6 inches wide, and features an all-composite airframe that can reach 800 miles-per-hour within 3 seconds of launch. Its motor weighs 15 pounds with fuel and produces 1,000 pounds of thrust at peak operating pressure. The team mixes its own fuel for the rocket at Missouri S&T’s Experimental Mine, where they also test the rocket’s motor.

The Rocket Design Team is one of 18 student-run teams in Missouri S&T’s Student Design and Experiential Learning Center (SDELC). The SDELC, housed in the Kummer Student Design Center, provides real-world team-based operations, including computer design laboratories, a manufacturing shop, office space and logistical support. Design teams mirror small start-up companies that plan large-scale projects, organize into departments, raise funds, communicate their ideas and solve open-ended design challenges. Most teams compete annually against other collegiate teams from around the country and the world. For more information about the teams, visit design.mst.edu.