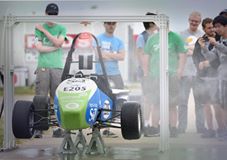 Missouri S&T’s Formula Electric car during the “rain” test, which helps ensure the car is save for both the driver and the pit crew in wet weather.

The competition, held during Formula SAE-Lincoln June 21-24 at Lincoln Airpark in Lincoln, Nebraska, is an international student design competition that demonstrates the viability of electric power by challenging students to design, build and race electric-powered Formula One-style cars.

As part of the competition, students present a budget report and detail the engineering principles behind each car’s design to a panel of industry experts. Each team’s car must pass a rigorous electronics inspection to ensure the car’s safety before competing in four dynamic events.

A skid-pad event tested the car’s cornering on a figure-8 course. An acceleration test measured the car’s straight-line speed over a short distance. A one-lap autocross event tested the car’s performance on a tight course. Each team’s fastest lap of four attempts determined the winner, as well as the starting order for the final event – an endurance race to prove durability. In the endurance race, the car must withstand the stress of long-term driving at elevated speeds over a long course. Each race is timed to rank the teams; none of the events are head-to-head races.

The Missouri S&T Formula SAE Electric Team’s car has a student-designed and -manufactured chassis, an aerodynamic fiberglass shell and a custom suspension system. The car’s battery pack, which consists of approximately 50 lithium battery cells, can produce a maximum voltage of nearly 300 volts and a current of roughly 200 amps.