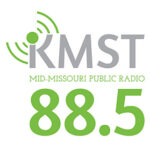 raised over $60,000 during its spring membership drive, surpassing its new member and sustaining member goals with a combined 84 members.

As part of its mission to support other community non-profit projects, KMST and Phelps County Bank partnered to raise $1,350, for “Take A Stand Against Child Abuse.” For each membership pledge KMST received during the drive, Phelps County Bank pledged $15 toward the “Take A Stand” program. KMST’s past joint fundraising drives included partnerships with the Rolla Animal Shelter and the Tri-County Humane Society, the Friday Backpack Program, the Smile Mobile, Wounded Warriors, Fill-A-Ford for the Holidays and others.

KMST thanks all of those throughout the communities it serves, volunteers, guest hosts, food donors and partnering businesses for their help in making the spring membership drive a big success.

KMST is a 100,000-watt non-commercial public radio station licensed to the Curators of the University of Missouri System. The station’s funding comes from the Corporation for Public Broadcasting, Missouri University of Science and Technology, the Missouri Arts Council, membership investments and underwriting.

KMST offers a mixed format of news from NPR, nationally and locally produced talk shows, and a wide range of music, including classical, jazz, acoustic folk, blues, big band, Celtic, bluegrass and Caribbean. KMST is located at 88.5 FM in and around the Rolla area, 96.3 FM in Lebanon, and is live-streamed online at www.kmst.org. Listeners can also follow the station on Facebook.