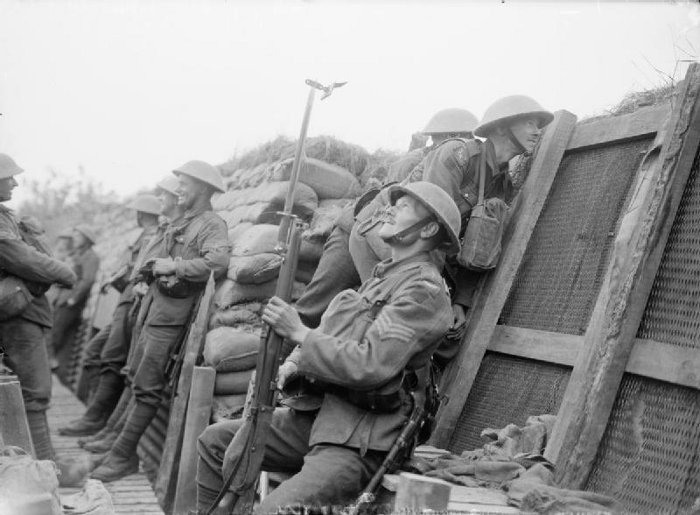 Soldiers wait in a trench during World War I. Public Domain

It was the “War to End All Wars,” and America’s entrance into the conflict on April 6, 1917, dramatically shifted World War I in favor of the Allies.

“The U.S. had a major impact on the outcome of World War I,” says military historian Dr. John C. McManus, the author of 12 books on war and military history.

Advances by both the Allies, led by France and Britain, and the opposing Central Powers, led by Germany, essentially stalled along the Western Front between 1915-1917. The reasons for this stalemate were many, including the horrors of trench warfare. Soldiers on both sides were holed up in trenches to avoid the persistent spray of machine gun bullets and shrapnel from artillery shells. Whenever an offensive attack was made, infantry soldiers were met with barbed wire, the hail of bullets, artillery explosions and, eventually, poison gas.

Soldiers were demoralized and sick, dealing with ailments like trench fever, which caused them to suffer from high fever, headaches, aching muscles and sores on the skin. When the first 14,000 U.S. troops arrived in France on June 26, 1917, more than two months after America joined the Allies, it provided a major boost to not only firepower, but also morale, McManus says. By the summer of 1918, and after the Selective Service Act had drafted 2.8 million men into service, the U.S. was sending some 10,000 fresh soldiers to France every day.

But the U.S. was providing the Allies with more than fresh, healthy soldiers.

“The U.S. government’s Food Administration, headed up by future president

Herbert Hoover, infused the Allied world with vital shipments of all major foodstuffs at a time when the Allied populations greatly needed it,” says McManus. “By contrast, the German public was beginning to deal with malnutrition and this was a major factor in the political instability that led to the collapse of the German government and the end of the war.”

When Germany agreed to an armistice on Nov. 11, 1918, it marked an end to the war and victory for the Allies. But the cost of victory was steep. Approximately six million Allied soldiers, including 50,000 Americans, and 3.5 million civilians from Allied countries died in the conflict.

“There are some enduring lessons as well, especially in relation to working with allies, dealing with firepower, brokering international disputes and preparing soldiers properly for combat,” says McManus.

A member of the editorial advisory board at World War II magazine and Global War Studies, McManus is the historical advisor for a PBS documentary titled “The American Road to Victory.” He recently received a National Endowment for Humanities Public Scholar Grant Fellowship to help fund research for his next major project, a two volume history of the U.S. Army in the Pacific/Asia theater during World War II.

On April 6, 2017. Posted in Academics & Faculty, College of Arts, Sciences, and Business, Department of History and Political Science, News