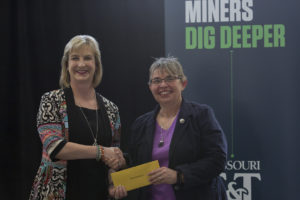 Dr. Mary Reidmeyer, teaching professor of ceramic engineering and outreach coordinator in materials science and engineering at Missouri University of Science and Technology, has been named the recipient of the inaugural Dr. Elizabeth Cummins Women’s Advocate Award at Missouri S&T. She was honored during a campus ceremony on Wednesday, April 19.

The award is given to any Missouri S&T employee, regardless of gender or job designation, that demonstrates commitment to the women on campus through mentorship and advocacy and by setting an example through professional achievement. As part of the award, Reidmeyer received a $1,000 stipend funded by Missouri S&T graduate Cynthia Tang, founder and former chair of Insight Industries Inc.

“In my 10 years at Missouri S&T, I’ve encountered dozens of amazing role models, professors, fellow students and colleagues. However, Mary has been the one constant support through the years,” wrote one nominator. “But what sets Mary apart … is the direct mentorship I’ve received from her over the years – woman to woman.”

Under Reidmeyer’s leadership as recruitment and outreach coordinator, undergraduate enrollment in ceramic engineering has doubled, and 50 percent of that enrollment is female. She is co-director of the Missouri S&T Materials Camp, coordinator of the department’s Jackling Introduction to Engineering curriculum, and a mentor who has encouraged future generations of female scientists and engineers through K-12 programs including Expanding Your Horizons, EcoGirl and the Society of Women Engineers’ lock-in conference.

“Perhaps Dr. Reidmeyer’s greatest achievement to date is the widely known and highly successful Hot Glass Shop, which she organized about seven years ago, along with a new student group, the Gaffer’s Guild,” wrote another nominator. “The Hot Glass Shop is a very effective recruiting tool and is kept busy giving demonstrations to prospective students, alumni and visitors from around the world.”

Reidmeyer earned bachelor of science, master of science and Ph.D. degrees in ceramic engineering from Missouri S&T in 1978, 1984 and 1989, respectively. Her research focuses on processing, product development, glasses, heat- and corrosion-resistant coatings, deposition methods, high-temperature lubricants, and consumables for the metal casting industry.

“I have worked with Dr. Reidmeyer in a variety of roles for over 25 years, and she is one of the most enthusiastic members of the materials science and engineering department in the areas of teaching, outreach, and overall service to the department and the university,” wrote another nominator.

“We need as many voices as possible to speak for women on campus, particularly when they want to go into STEM fields, but also for women who want to go into the humanities,” says Cummins. “The ultimate aim is to have a voice speaking out for women’s issues, noting their intelligence and ability, and then the women themselves will have the confidence to also become a voice.”

“I felt that female faculty are supported and mentored by many people, and I wanted to recognize and publicly support these mentors, regardless of their gender or position at the university,” says Tang, who established the award in honor of one of her own mentors.

“I named this award after Liz Cummins as a way to honor an amazing woman who has supported so many women in so many ways during her career,” Tang says.

On April 19, 2017. Posted in College of Engineering and Computing, Featured, Materials Science and Engineering, People