Missouri S&T chapter of Engineers Without Borders receives $750,000 in funding 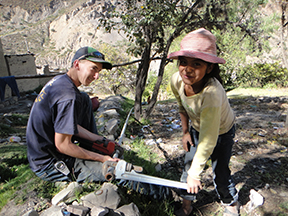 From clean drinking water to flood control, Missouri University of Science and Technology’s Engineers Without Borders projects are changing lives in Central and South America. Now two major donors have stepped forward to provide $750,000 in funding for EWB – a $500,000 challenge grant from the Houston-based Montana Cahill Foundation and a $250,000 gift from Missouri S&T graduate David Heikkinen and his wife, Ann.

“EWB students are a different breed and we are lucky to have them,” says Duane Montana, a Montana Cahill Foundation director and retired executive with Brown & Root who earned a bachelor of science degree in civil engineering from Missouri S&T. “EWB students represent something of our higher nature and better selves. They make a commitment, often over multiple years, that goes beyond the classroom. It is a commitment to a community to provide its people with a basic life necessity: clean water.”

The Montana Cahill Foundation challenge grant is the largest gift in the history of S&T’s EWB chapter. It will match every dollar contributed to the chapter up to $500,000 to create a $1 million fund in support of EWB. The Heikkinens’ gift is the second-largest in chapter history and brings the challenge halfway to its goal of raising $500,000. With $250,000 in challenge funds remaining, contributions are still needed.

“As directors who have lived and worked globally, Duane and I believe there is much to be gained from international exposure,” says Montana, who holds a bachelor of science degree in chemical engineering from S&T and retired in 2015 as president and CEO of Shell Midstream Partners. “EWB students gain the obvious benefits of language skills and cultural immersion, but they also gain a better understanding of the world and its people.”

David Heikkinen, founding partner and CEO of Houston-based Heikkinen Energy Advisors, is a Rolla native who earned a bachelor of science degree in mechanical engineering from S&T and an MBA from Tulane University. He formerly served as global head of exploration and production research for Tudor, Pickering, Holt & Co. and Capital One Southcoast.

“A gift to EWB has an impact on many more students than one scholarship could, and that cascade of compounding appealed to us,” says Heikkinen. “Say that our contribution touches 20 students in EWB, and those 20 students touched 10 or 100 people with each EWB project. All of a sudden we have touched the lives of 200 or even 2,000 people. Our donation was also matched by the Montana Cahill Foundation, which doubled its impact immediately and secured the EWB program for years to come.”

Missouri S&T established its EWB student chapter in 2005, three years after the international organization was founded to help developing communities improve their quality of life through sustainable engineering projects. Teams of S&T students are working on projects in small communities in Bolivia, Guatemala and Honduras. They are primarily designing and building water storage and distribution systems.

“EWB introduces students to a different kind of experiential learning,” he says. “It connects them to the real world of poverty, malnutrition, infant mortality and disenfranchisement. “The generosity of the Montana Cahill Foundation and the Heikkinens has fulfilled my dream of long-term financial sustainability for EWB and ensured that future students have these opportunities.”

For Dr. Mark Fitch, S&T associate professor of environmental engineering and EWB faculty advisor, the experience is a wake-up call. “We work in the poorest communities in the poorest countries in our hemisphere,” he says. “The majority of S&T students have never lived alongside someone who survives on $7 a day.”

For more information on how you can help EWB meet the Montana Cahill Foundation’s challenge, contact Tory Verkamp, Missouri S&T executive director of development, at verkampv@mst.edu or 573-341-4490.