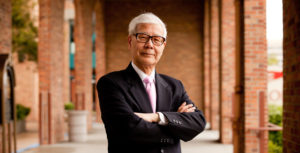 Dr. Man-Chung Tang has designed over 100 bridges around the world. He will give a talk about innovation on April 21 in Butler-Carlton Hall on the Missouri S&T campus.

Innovation drives humankind forward with new ideas, new ways of doing, new ways of thinking — and Dr. Man-Chung Tang, a world authority on cable-stayed bridges, has brought innovating designs to the structures for over 50 years.

It is often said, “the sun never sets on a Man-Chung Tang bridge.” His designs can be found all around the world and are considered to be a blending of art and premier engineering development.

As the 2017 Stueck Lecture speaker, he will present his views on art and innovation in design at 3 p.m. Friday, April 21 in Room 125 Butler-Carlton Hall. The lecture, which is free and open to the public, is presented as part of the Neil and Maurita Stueck Distinguished Lecture Series for civil, architectural and environmental engineering at Missouri S&T. The series is made possible by a fund established by Maurita Stueck to bring additional outside perspectives to Missouri S&T students, and to honor her late husband, Neil Stueck, a 1943 civil engineering graduate of the university.

Tang is known for his immeasurable contributions to the bridge design industry and for the quality and innovation behind his individual designs. His career as a structural engineer has spanned over 50 years and has encompassed designing 100-plus bridges around the globe, including over 32 cable-stayed bridges, four major suspension bridges and numerous segmental bridges.

Tang asks people to consider these questions: What is innovation? How do you become innovative? Who is capable of being innovative?

Tang was elected to the National Academy of Engineering in 1995 for his contribution to the advancement of cable-stayed bridges. He also served as chairman of the American Society of Civil Engineers (ASCE) committee on cable-suspended bridges and published a definitive guideline for the design of cable-stayed bridges, which is used today by engineers worldwide.

Tang is the 2008 recipient of the Friendship Award, China’s highest award for foreign experts who have made outstanding contributions to the country’s economic and social progress. In June 2000, he was elected as a foreign member to the Chinese Academy of Engineering. The Chinese Academy of Engineering is the highest honorary and advisory organization for engineering and technology in China, and an election to the academy is considered the highest title and lifelong honor an engineer can receive in China.

After earning a Ph.D. in civil engineering in 1965 from Technical University in Darmsadt, Germany, Tang worked on the design of several record-breaking bridges. He previously served as chief engineer and was responsible for the design, redesign and construction engineering of long-span segmental concrete box girder bridges in the United States and Canada. Currently he is overseeing the design and construction of several major long-span bridges in China.

A founding member of the Post-Tensioning Institute committee, Tang has written numerous articles for publications on civil engineering and bridge design and engineering.

On March 29, 2017. Posted in Civil, Architectural and Environmental Engineering, College of Engineering and Computing, Featured, People