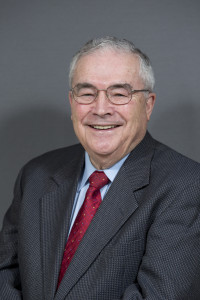 Dr. Delbert E. Day, a prolific inventor whose work with specialty glasses has led to treatments for cancer, bone tissue regeneration and wound care, has been named a National Academy of Inventors Fellow.

The NAI announced Day’s selection today (Tuesday, Dec. 13, 2016) in recognition of his “highly prolific spirit of innovation in creating or facilitating outstanding inventions that have made a tangible impact on quality of life, economic development and the welfare of society.” He will be inducted into the NAI on April 6, 2017, during a ceremony at the John F. Kennedy Presidential Library & Museum in Boston.

Day is a Curators’ Distinguished Professor Emeritus of ceramic engineering at Missouri University of Science and Technology and has served Missouri S&T for over 50 years in various teaching, research and administrative capacities. He also is the founder of Mo-Sci Corp., a company that manufactures specialty glasses for medical applications.

“Dr. Day is a pioneer in the field of biomedical engineering whose innovative research has led to entirely new approaches for medical treatments,” says Dr. Cheryl B. Schrader, chancellor of Missouri S&T. “As a member of the National Academy of Engineering, he holds an esteemed position among our nation’s finest engineering researchers and practitioners. Now, with his election to the National Academy of Inventors, Del will receive important recognition for his inventiveness and entrepreneurial spirit. We’re very proud of all Del has accomplished and of his contributions to healthcare and to the quality of life in Missouri and the nation.”

“Del Day is an inspiring teacher, an outstanding glass scientist and a very successful entrepreneur,” says Dr. Richard K. Brow, interim dean of the College of Engineering and Computing and, like Day, a Curators’ Distinguished Professor of ceramic engineering. “While Del is best known for his work with using glass materials to treat cancer and other medical issues, his ingenuity extends to other fields where specialty glasses can be used to solve various engineering problems. His work is world-famous, and all of us at Missouri S&T are very proud of our colleague and this well-deserved recognition.”

Day will be inducted as part of the Sixth Annual Conference of the National Academy of Inventors. With the election of the 2016 class, there are now 757 NAI Fellows representing 229 research universities and governmental and non-profit research institutes.

An expert in developing specialty glasses for use in healthcare, transportation infrastructure and other applications, Day is known for co-inventing radioactive glass microspheres, now marketed under the brand name TheraSphere, which are used commercially at over 200 sites worldwide to treat patients with inoperable liver cancer. The treatment consists of injecting millions of the irradiated tiny beads – each one about one-third the thickness of a human hair – into the main artery supplying blood to the liver. The radioactive beads then deliver localized radiation to malignant cells without harming the surrounding healthy tissue.

More recently, work by Day and other Missouri S&T researchers has led to the development of bioactive glass fibers that help speed the healing of chronic, non-healing wounds. The cotton-like glass fibers – called Mirragen – have been undergoing clinical trials at Phelps County Regional Medical Center (PCRMC) in Rolla, Missouri. Mirragen was also recently approved for human use by the U.S. Food and Drug Administration.

Day earned a bachelor’s degree in ceramic engineering from the Missouri School of Mines and Metallurgy, now Missouri S&T, in 1958. He then attended Pennsylvania State University, where he earned a master of science degree and doctorate in ceramic technology in 1959 and 1961, respectively. He then began his academic career at Missouri S&T, where he has served as director of the Industrial Research Center and director of the Graduate Center for Materials Research.

During his tenure at Missouri S&T, Day has published more than 400 papers on the properties, structures and uses of glass, has edited three books, and has received 47 U.S. and foreign patents, with another seven U.S. patents pending. In the 1980s, Day conducted the first U.S. glass melting experiments in micro-gravity on a NASA space shuttle mission.  He is a co-inventor of “Glasphalt,” which recycles waste glass by using it as part of the aggregate in asphalt paving.

Day’s numerous honors and awards include election to the National Academy of Engineering in 2004, Distinguished Life Member (and past president) of the American Ceramic Society, The Presidential Award for Research and Creativity and the Presidential Citation for Alumni Service Award from the University of Missouri System, selection as the Nation’s Outstanding Young Ceramic Engineer (PACE-Schwartzwalder Award) by the National Institute of Ceramic Engineers, the Hosler Alumni Scholar Medal for Scientific Achievement (Penn State), the Chancellor Medal and Doctor of Science (Honoris Causa) from Missouri S&T and the University of Missouri System, and the Outstanding Educator Award from the American Ceramic Society. He is a Fellow of the American Ceramic Society, the Society of Glass Technology (United Kingdom) and the National Institute of Ceramic Engineers. In 2009, he received the Toledo Glass & Ceramics award for his “Achievements in Education and Industry,” and in 2010 he was awarded the Phoenix Award and named “Glass Person of the Year” for his technical achievements and contributions to the glass industry. In 2014 he received the Alumni Fellow Award from Penn State.

On December 13, 2016. Posted in College of Engineering and Computing, Materials Science and Engineering, People, Top Headlines