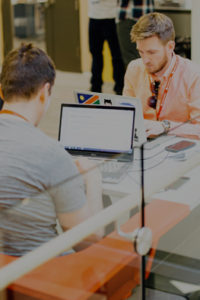 Being civic-minded comes with rewards, both emotionally and — for Missouri University of Science and Technology students — financially.

Missouri S&T computer science and computer engineering students competed in GlobalHack 2016 in October in St. Louis, designing software to provide help to the homeless. The team ScoobyDoIt, with S&T juniors in computer science John Bagsby and Seth Kitchen, won the college division and a $100,000 prize. Also on the ScoobyDoIt team were Jacob Baird from Southern Illinois University-Edwardsville and Tom Hood of Westminster College.

The challenge was to use software called HMIS, or Homeless Management Information System, which collects and analyzes data for homeless clients or those at-risk of becoming homeless. Teams were asked to develop solutions for one of four sub-problems, which were generated by in-person interviews and focus groups conducted by GlobalHack staff and partners. Topics included prevention; emergency shelters; electronic referrals and data sharing; and data visualization.

“Such recognition in international competitions like GlobalHack speaks highly of the quality of our students and our computer science program,” says Dr. Sajal Das, chair of the computer science department. “It brings tremendous visibility to Missouri S&T.”

“We came up with the idea because it was made known to us that around 40 percent of the homeless actually have smartphones,” Bagsby says. “But to reach out to more, we decided to use Twilio, which is a text message and phone service library that allows people without a smartphone to text or call in to get information about the nearest shelter or food pantry.

“This approach appealed to us because we were able to reach out to not only the homeless community with smartphones, but to the 80 percent that had phones.”

The final part of the project was a universal Windows app that they’re putting on kiosks that are placed in areas of high homelessness.

“After the competition, we came up with the idea to create a heat map based on the information we were storing in our database,” Bagsby says. “Every time someone makes a Twilio request, we store all their information. This would give us an idea on where to place these kiosks to reach out to the community.”

ScoobyDoIt wasn’t the only S&T team to do well at the GlobalHack.

Missouri S&T freshmen Matt Sauer, Samuel Wait and Greg Cordover’s Penguin Team was second in the college division and collected a $50,000 prize. Penguin allows the homeless to call into a central system that will tell people what shelters are near them and which have open beds.

On November 14, 2016. Posted in College of Engineering and Computing, Computer Science, Events, Featured