Changing the game one hat at a time 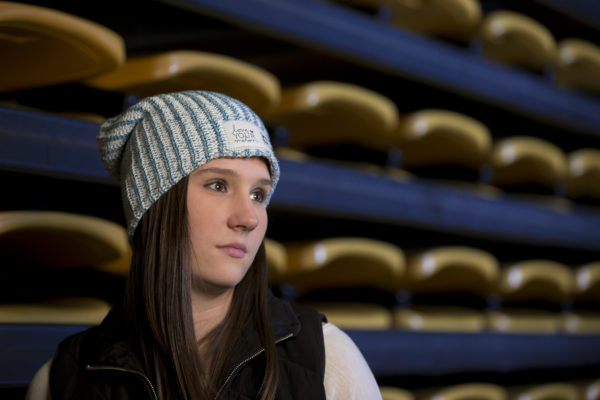 “If one week of feeling horrible can give someone else even one enjoyable day out of the hospital, I would do it as often as possible.”

That was the mentality of Ashley Allegri when she donated for “Be The Match,” a worldwide bone marrow transplantation network that provides support and resources for patients and donors. This past September, Allegri spent five hours in a hospital bed donating bone marrow to an anonymous recipient.

“I joined the registry a couple of years ago after my dad, who had previously joined it, matched with someone and was asked to donate,” says Allegri. “I thought it was amazing to be able to help someone on such a deep level. I never expected to be a match since the chance is so slim, but I am glad I was called on to help.”

Allegri, a senior in engineering management from Leawood, Kansas, had a one-in-430 chance to match with a person battling cancer or other immune diseases. Donations through Be The Match help patients who are located around the world and may be battling diseases such as Hodgkin lymphoma, multiple myeloma, leukemia or sickle cell disease.

Her donation process, called peripheral blood stem cell (PBSC), included a series of preparations and an uncomfortable five-hour cycling and processing of her blood to separate the blood-forming cells for the donation. For patient confidentiality reasons, donors may never know who they gave blood to or if the recipient makes a full recovery. 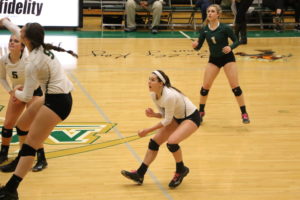 Allegri in action for the Lady Miners. Photo by Missouri S&T sports information.

It took Allegri a little over a week to fully recover from the procedure. Despite the donation, she was still able to compete this season as a member of the Lady Miner volleyball team. In fact, one month after the procedure she set a new school record for serving 12 straight points, breaking the previous record of 10 that stood since 2008.

When told she set a new school record, Allegri was surprised.

“I never read our team news or look at stats,” she says. “I know when I’ve had a good game or not, and tend to not worry about a particular number or percentage.”

Besides being a bone marrow donor, Allegri leads efforts on campus for “Love Your Melon,” an apparel brand that works to provide a hat to every child battling cancer in the United States. Missouri S&T’s  Love Your Melon group aims to promote sales of hand-knit winter hats which, when purchased with the Missouri S&T school code, provide funding for the S&T group to visit sick children in the area to give them hats and a day of entertainment. The S&T group hopes to become a registered student organization within the next few years.

So why does Allegri donate and put all this effort into the campuswide project?

“I just always liked to help people, I don’t know why my passions have evolved to focus so much on healthcare,” she says. “It is easy to see the need to help in the fight against cancer, so you need to help make the changes you hope to see.”

On November 29, 2016. Posted in Athletics, College of Engineering and Computing, Engineering Management and Systems Engineering, People