When Missouri S&T football’s offensive unit lines up, all eyes are on the quarterback. But the true center of attention is the person who plays center – because no matter what play the Miners run, it doesn’t start until the ball is snapped.

Adam Echele, a fourth-year junior at S&T, handles snapping duties for the Miners, who have one of the most potent offenses in the Great Lakes Valley Conference. As football observers know, a successful offense depends on a well-coordinated offensive line.

“We have to help each other out and make plays for each other in order to be to be successful,” Echele says. “The ability for all of us to work together really well is what turns this into our biggest strong suit, as we can learn and make adjustments together.”

Cheer on the football Miners in the final home game of the season: 1 p.m. Saturday, Nov. 5

“Adam is the general of the offensive line with his ability to communicate to the rest of the linemen and running backs to make us right,” S&T head coach Tyler Fenwick says. “He has earned the respect of the rest of the guys through his character and intelligence. We’ve been able to give him more and more responsibility with the experience he has gained in making the calls up front.” 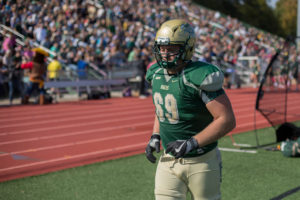 “When I came here, I was asked if I could snap and said, ‘Yeah, why not? I’ll figure it out’,” says Adam Echele, shown here during the 2016 Homecoming game. Photo By Sam O’Keefe/Missouri S&T

Echele came to S&T as part of the Miners’ 2013 recruiting class, but he didn’t come as a center. He played at offensive tackle at Lafayette High School in the St. Louis suburbs and didn’t begin working at center until his first season in the program as a redshirt.

“When I came here, I was asked if I could snap and said, ‘Yeah, why not? I’ll figure it out,’ ” the mechanical engineering student says.

During his redshirt freshman season in 2013, Echele used that time to learn the nuances of the position from the incumbent center, Offie Adams, before moving into the starting lineup the next year.

“It was a good learning experience for me without the pressure of having to play right way,” Echele says. “Offie was a senior at the time, so I was able to watch and learn a lot from him about his leadership skills and just how he played the game.”

A center’s job on the offensive line is complex, and the job begins before the ball is snapped. If the Miners make a pre-snap adjustment, Echele’s job is to communicate those changes to the other offensive linemen. Once the snap is made, it’s time to execute the play. For Echele, that means blocking the opposing nose tackles or defensive tackles, usually the biggest players on the opposite side of the line.

“I would say that the hardest part about being a center is making the calls at the line because first, we’re figuring out what the defensive front is, then you have a lot of movement by the defensive side before and after the snap, so we may have to block things a little differently,” he says.

“It just becomes a matter of having to trust each other and know that everyone’s on the same page, and we’re going to do what we need to do to make the play successful.”

Echele is one of the veterans on the Miner offensive line, which includes seniors Marcellus Corbin and Alex Steinlage, juniors Aaron Fritts and Drake Randall and redshirt sophomore Austin Holmes, all of whom have been in the program for the past three years. In addition, the Miners currently start a redshirt freshman, Josh Elam, along with redshirt freshman Josh Thornton and newcomer Ebrahem Salem, who joined the team as a mid-year transfer last spring.

“It starts with the center,” says Mike McFarland, S&T’s offensive line coach. “When we get to the line, Adam has to identify the front, which tells the others how to treat the play and what their assignments will be. He’ll identify where to send our protection on pass plays and how we will target run plays.”

They’re good about talking to each other and coming up with a solution on the fly, Echele says, and McFarland’s experience is a big help, too.

“I try to help them solve problems, and it requires honest feedback on the sidelines between series,” McFarland says. “Our mottos are ‘one wrong, all wrong’ — we have to have all five guys on the same page working together — and ‘affirm and confirm’ — affirm your assignment and confirm it with the guy next to you.”

Although offensive linemen tend to be anonymous, they are also among the tightest groups of any on a football team.

“We have a good time on the field, and especially when things are going well we can make jokes with each other,” Echele says. “Off the field, we hang out quite often. Aaron, Drake and I have spent a lot of time together since our freshman year, but as a group we all get along very well.”

Echele, who is scheduled to graduate in December 2017 with a bachelor’s of science degree in mechanical engineering, wants to go into the sales and marketing side of the engineering field. Future plans also include going to graduate school to get a master’s degree in business administration.

But for now, the focus is on helping lead the Miner offense to continued success — even if he and his fellow line mates aren’t the first thing that fans notice.