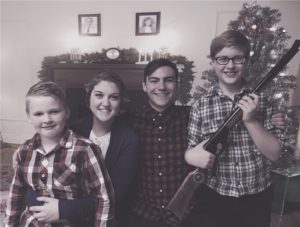 “A Christmas Story” follows Ralphie Parker’s quest for a for a Red Rider BB Gun. Photo by Julie Phelps.

The Miner League Theatre Players at Missouri University of Science and Technology will perform a production of “A Christmas Story” Nov. 10-13 in Leach Theatre of Castleman Hall.

“A Christmas Story” centers on 12-year-old Ralphie Parker and his family at Christmas time in 1950s Indiana. Ralphie, played by community member Zachary Phelps, wants nothing more for Christmas than “an official Red Ryder carbine action 200-shot range model air rifle with a compass and this thing which tells time built right into the stock,” only to be told time and time again “you’ll shoot your eye out.” The story of his quest for his Christmas wish is narrated by adult Ralphie, played by public radio KMST program director John Larson. The popular holiday film was adapted for the stage by Philip Grecian.

“All of our students are amazing talents, and grew up with ‘A Christmas Story,’ so they’ve all been very excited to put this production on,” says Jeanne Stanley, an associate professor of theatre at Missouri S&T. “We are lucky to have 10 children from the Rolla community, 10 Missouri S&T students and John Larson from KMST in the cast, making for a fun, multi-generational experience.”

Tickets are $7 for Missouri S&T students and children 12 and under and $12 for adults. Tickets can be purchased through the Leach Theatre Box Office located at 400 W. 10th St. in Rolla. The box office is open 9 a.m. to 4 p.m. Monday through Friday. Tickets can also be purchased by calling the box office at 573-341-4219.

For more information contact the Leach Theatre Box Office at 573-341-4219 or by email at leach@mst.edu.

The following Missouri S&T students and Rolla community members will participate in the performances: