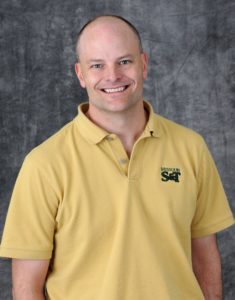 Professor Joel Burken has taken over as chair of the civil, architectural and environmental engineering department at Missouri S&T. He had been the department’s interim chair since December.

Dr. Joel Burken, Curators’ Distinguished Professor of civil, architectural and environmental engineering at Missouri University of Science and Technology, is now the department’s chair after signing an agreement on Thursday July 14.

Burken had been the department’s interim chair since December after previously serving as the department’s associate chair. Although his title has changed, he says he’ll still be involved in research and teaching.

“Dr. Burken was a natural choice to select as the department’s chair,” says Dr. John Myers, acting vice provost and dean of the College of Engineering and Computing at Missouri S&T. “He is a proven leader and steady hand at the helm who has an intimate understanding and knowledge of the past and present state of the department, as well as a deep understanding of where the department would like to be in the months and years to come.

“His experience and skill have helped the department remain on the cutting edge of research as it works to solve some of the world’s great challenges. Having Dr. Burken as the permanent chair ensures that that work will continue without missing a beat.”

Stability is key, Burken says. He’ll continue to be involved in research and teaching, but having the chair position settled will ensure that the department runs smoothly.

“I wanted to step up and help the department reach our vision and potential,” he says. “Knowing the challenges ahead, and the people as part of the team, I think I can do a good job,” he said. “And we need it.”

During his time at Missouri S&T, he has published over 70 peer-reviewed articles, including four cover features in leading journals in environmental engineering and technology. Burken joined the S&T faculty in 1997 as an assistant professor of civil engineering. He was named associate professor in 2002 and professor in 2008. In 2015, he was named as a Curators’ Professor.

Last month, Burken was named a Fellow of the Association of Environmental Engineering and Science Professors (AEESP) for his service to AEESP, his professional peers and colleagues. He was elected to the AEESP board of directors in 2008 and was board president in 2011-12. And he currently leads the AEESP Environmental Engineering Program Leaders Committee, which he worked to develop with other colleagues nationally.

Burken twice won the Rudolph Hering Medal from the American Society of Civil Engineers. In 2000, he received a National Science Foundation faculty early career development award. He has received seven Faculty Excellence Awards as well as the Alumni Merit Award from Missouri S&T’s Miner Alumni Association. In 2015, he received the University of Missouri System President’s Award for Service.

Burken earned his bachelor of science, master of science and Ph.D. in environmental engineering at the University of Iowa in 1991, 1993 and 1996, respectively.

On July 19, 2016. Posted in Civil, Architectural and Environmental Engineering, College of Engineering and Computing, Featured, People