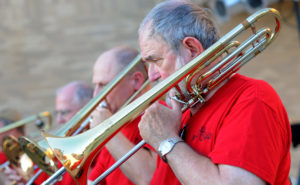 Music fans in the Rolla area will have a chance to relax on Castleman Hall’s lawn and hear the first concert of the season by the Rolla Town Band, featuring a variety of pieces from different genres, including a selection of military-themed marches.

The concert will be held at 7:30 p.m. Thursday, June 30, on the Castleman Hall Green, located at the corner of 10th and State streets, on the campus of Missouri University of Science and Technology. The concert is free and open to the public.

“The concert will feature a series of pops music and marches,” says David Cress, assistant teaching professor of arts, languages, and philosophy at Missouri S&T and conductor of the Rolla Town Band. “‘Star Spangled Spectacular,’ selections from the musical ‘Chicago,’ and a big band tribute will make up the performance. The ‘World’s Finest Rolla German Band’ will perform during intermission.”

On June 23, 2016. Posted in College of Arts, Sciences, and Business, Department of Arts, Languages and Philosophy, Events, Featured, Performing Arts