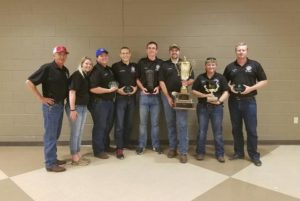 Missouri University of Science and Technology won the Southern Regional Mine Rescue Competition May 3-5 in New Iberia, Louisiana.

Missouri S&T’s Gold Team finished first overall after placing first in the smoke chamber, first aid and on the field and second place in team tech. The Missouri S&T Black Team finished ninth out of 16 teams.

The competition involves a simulated mine disaster that is set up and monitored by the federal Mine Safety and Health Administration. In addition to the rescue simulation, other events include first aid, gas testing and maintaining a complex self-contained breathing apparatus. Written exams are also administered.

Deanna Fitzgerald, a 2015 mining engineering graduate and a graduate student in explosives engineering from Salisbury, Missouri, had perfect timing in joining the Gold team. “Overall, it was a great experience and extremely educational, and I am very happy I joined, even if it was for one semester,” she said.

“The best thing about this trip was getting the chance to see how quickly and effective all the mine rescue teams can work and their support for each other. It was wonderful to see that before any team takes the field, they leave the holding area with a round of applause. It is quite moving when you sit back and think about what these teams are actually trained to do.”

On May 10, 2016. Posted in College of Engineering and Computing, Events, Featured, Mining Engineering

One thought on “Missouri S&T mine rescue team wins competition”