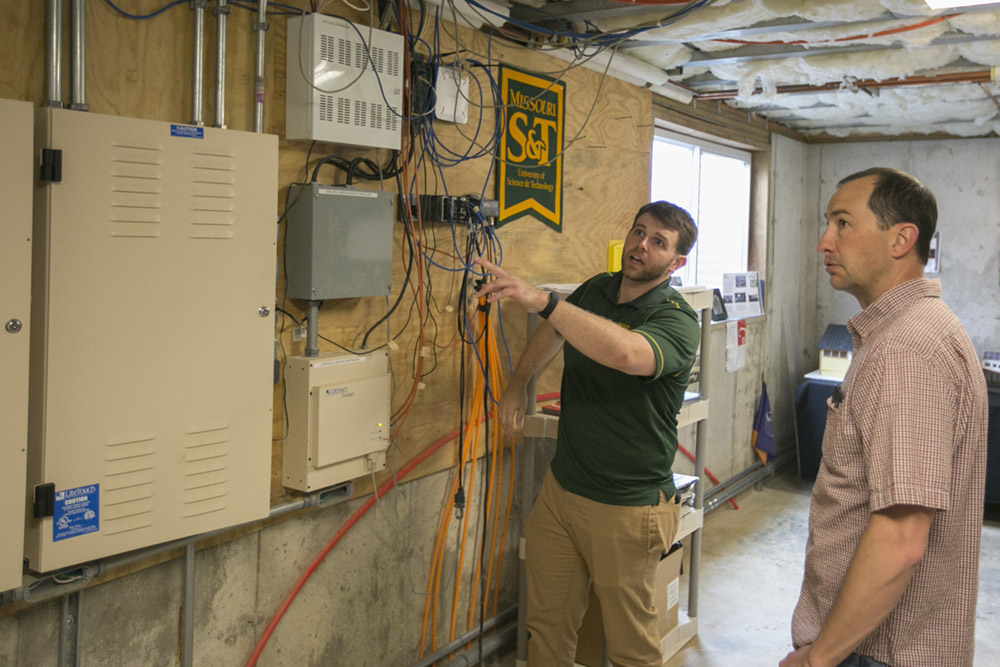 Missouri University of Science and Technology doctoral student Cory Brennan had a hand in all of them.

A project engineer for Azimuth Energy in St. Louis while he works to complete an engineering management Ph.D. under the direction of Dr. Suzanna Long, Brennan got his start as a student project manager for the 2009 Solar House Design Team. And through that he found his calling at Missouri S&T.

“Since I started with the Solar House Team on campus, I really developed a passion for renewable energy and solar energy,” he says.

That passion led him to the Office of Sustainable Energy and Environmental Engagement (OSE3) at Missouri S&T as a graduate assistant and student sustainability coordinator. Working there from 2011 to 2015, he helped make the Solar Village Microgrid a reality.

A project that involves OSE3, Missouri S&T professors and students, industry partners and energy companies, the microgrid is an energy management and storage system for the Solar Village houses. The houses are all past entrants in the U.S. Department of Energy’s Solar Decathlon design competition, and with the microgrid, they’re less dependent on the utility power grid than traditional houses. Energy from the houses’ solar panels is stored in batteries, and a power electronic converter allows the houses to access and share that stored energy. 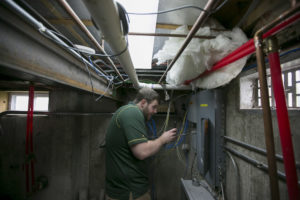 “The real challenge was to make sure that — because this is a first of its kind at Missouri S&T — we could build and operate this microgrid system in a safe manner,” says Brennan, who helped write grant applications that funded part of the project.

Brennan is modest in describing his role, but those who worked with him are not.

“He was a key part in getting those houses running down there,” says Tony Arnold, assistant director of OSE3. “It would have not existed without him.”

Brennan’s graduate work was partially funded by a Federal Transit Administration grant that was awarded to OSE3 director Angela Rolufs in 2009. That grant brought the EBus to the S&T campus, and Brennan played a pivotal role in integrating the bus into campus operations while creating a visible example of S&T’s commitment to reducing its carbon footprint. He coordinated the bus’s route, attended on-site operations and maintenance training at EBus headquarters in Downey, California — and even drove it off the semi’s trailer when it was delivered in 2014.

After the EBus came to town, Brennan worked to make sure it stayed up and running.

“He spent untold hours under the bus, making repairs, troubleshooting with the people in California who made the bus,” says Tony Arnold, assistant director of OSE3. “On Friday night when he should be out having fun, he would be under the bus with his arms up to his elbows in grease and fluid.”

With all of Brennan’s experience in renewable energy and sustainability, getting involved in Earth Day celebrations at Missouri S&T was a foregone conclusion.

Planning for the April event began in September of the prior year, he said.

The celebration involved partners on campus, such as numerous student organizations, faculty and staff, and off-campus support from organizations like the U.S. Forest Service. Besides celebrating the Earth, the event featured booths promoting healthy living, recycling and energy conservation — and a reading to schoolchildren of the Dr. Seuss book “The Lorax.”

“It was kind of the whole gamut of sustainable life and sustainable living,” Brennan says. “As a nation, we have to understand how much energy we consume.”

With all his experience at Missouri S&T, Arnold says Brennan’s future is bright.

“I think he is a really, really amazing guy,” Arnold says. “He’s going to do great stuff. He is what an S&T alumnus is all about.”