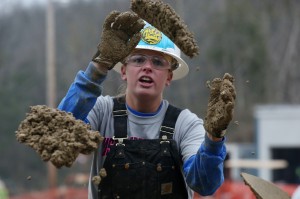 A group of Missouri University of Science and Technology students has traveled nearly 1,500 miles to defend a world championship title in events based on old-fashioned mining techniques generally known as “mucking.” The students are competing in the 38th Intercollegiate Mining Competition held Wednesday, March 30, through Sunday, April 3, at Montana Tech of the University of Montana in Butte, Montana.

“I don’t think there is additional pressure to defend our title,” women’s team co-captain Jennifer Holloway says. “We always push our members to reach goals so that we can feel confident that we will be at the top of the pack.”

Some of Missouri S&T’s top competitors are teams from Australia and the Colorado School of Mines, Holloway says. But just because they’re going after the same prize doesn’t mean they’re mortal enemies; socializing is part of the fun, too.

“Every year the teams end up staying in the same hotel with at least one other competing team,” Holloway says. “With the competition being a week long and many social events happening, everyone has the opportunity to meet the other team members.”

First held in 1978, the games were created to honor 91 miners who died in a fire at Idaho’s Sunshine Mine in 1972. The competition celebrates traditional mining practices and helps create a global community of mining students. Mining colleges and universities around the world rotate hosting the Intercollegiate Mining Competition.

Katherine Beardslee of O’Fallon, Missouri, a senior in mining engineering

Caitlin Darnall of Danvers, Illinois, a senior in petroleum engineering

Nichole Wescott of Rolla, Missouri, a sophomore in mining engineering

Thabiso Boleban or Ramotswa, Botswana, a senior in explosives engineering

Clayton Mears of Portage, Ohio, a junior in mining engineering

Jared Proctor of Collinsville, Illinois, a junior in mining engineering

Josh Williams of Fillmore, Illinois, a junior in mining engineering

John Follmer of O’Fallon, Missouri, a junior in mining engineering

Ben Hall of Omaha, Nebraska, a senior in multidisciplinary studies

John Marcana of Rolla, Missouri, a sophomore in mining engineering

Roger Taylor of St. Louis, a sophomore in mining engineering