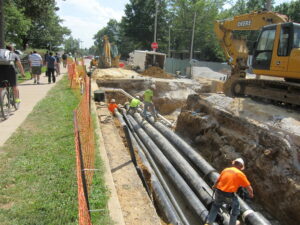 Climate change is one of the world’s great challenges, and Missouri University of Science and Technology has committed to be a demonstrated leader in climate action and sustainable solutions by signing the Second Nature Climate Commitment charter.

According to Second Nature, the commitment “integrates a goal of carbon neutrality with climate resilience and provides a systems approach to mitigating and adapting to a changing climate.” Signatories commit to exercising “leadership in their communities and throughout society by providing the knowledge, research, practice, and informed graduates to create a positive and sustainable future.”

Missouri S&T first became a signatory institution of the American College and University Presidents’ Climate Commitment in 2009, which Second Nature recently renamed Carbon Commitment. Requirements for membership included completing a climate action plan that marks target dates for achieving carbon neutrality. Using 2010 as a baseline, Missouri S&T identified 2050 as the target date for being carbon neutral, with interim dates of 2020 for a 20 percent reduction and 2035 for a 40 percent reduction in greenhouse gas emissions.

Carbon emissions from automobiles, power plants and industrial factories are linked to warmer ocean and global temperatures, higher seas and violent weather patterns around the world. At Missouri S&T, campus initiatives to mitigate carbon’s effects include implementation of an innovative campuswide geothermal energy system that allowed the campus to shut down the World War II-era coal-fired power plant, says Angie Rolufs, director of the Office of Sustainable Energy and Environmental Engagement (OSE3).

“Ted Ruth and Jim Packard in our physical facilities department have demonstrated leadership by including green building and energy-saving technologies in both new construction and daily operations,” she says.

Taken together, it all fits into part of the Missouri S&T strategic plan to exercise leadership in sustainability on campus by integrating sustainability practices in daily operations.

“Our Solar Village is the only neighborhood of its kind on any university campus, and it demonstrates the feasibility of green, low-impact living while highlighting the creativity of the students who designed and built those homes,” says Missouri S&T Chancellor Cheryl B. Schrader. “Our geothermal energy system is one of the most comprehensive to be undertaken on a university campus. I believe it, too, will become a model for other institutions to emulate.”

“We want Missouri S&T to be seen as a leader in these technologies, the resource to educate our students to make a difference in the world,” Rolufs adds. “We want to set the example.”

Research drives innovation, and that can put Missouri S&T in a prime position to apply for grants related to carbon reduction and climate resilience, Rolufs says.

“We’re a leader in technological research to keep our country moving in the right direction,” she says.

Missouri S&T also is a co-host of the April 13-14 Sustainable Energy Conference in St. Louis. Other hosts are the sustainability offices at Ameren, Saint Louis University and Washington University.