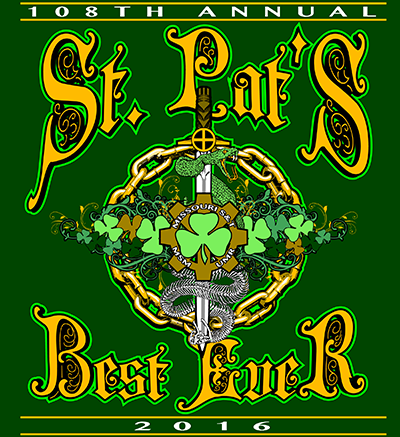 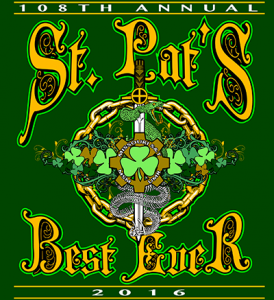 The new knights will be honored during a public coronation at 9 p.m. Friday, March 18, in Leach Theatre of Castleman Hall on the Missouri S&T campus.

The 2016 St. Pat’s Parade begins at 11 a.m. Saturday, March 19, on Pine Street in Rolla. Fred Voss will serve as parade marshal and as Honorary St. Pat. Biographical information is as follows:

Fred Voss of Rolla, Missouri, is the former president of Fred Voss Enterprises Inc. He has served on the board of directors for Phelps County Bank for 20 years and is an emeritus ambassador to the Rolla Chamber of Commerce. Voss’s family has been active with St. Pat’s events for 36 years. Voss received a St. Pat’s jacket and was named an honorary St. Pat’s Committee representative in 1980 and was named an Honorary Knight in 1997. He and his wife, Kathy, were previous beverage distributors for St. Pat’s celebrations for several years, starting in 1980. Kathy was named an Honorary Knight in 2004 and has served as the St. Pat’s Committee community advisor since 1990. Their daughter, Lisa, was the Queen’s page in 1985, their grandson, Riley, was the crown bearer in 2007 and their granddaughter, Alyssa, was the Queen’s page in 2012. Their son-in-law, Josh Berens, is a 1999 mechanical engineering graduate of S&T. Voss and his wife are members of the Blarney Club.

Ted Day of Rolla, Missouri, is president and CEO of Mo-Sci Corp. Prior to this position, Day was vice president of Mo-Sci and had held various positions at Fort Leonard Wood General Hospital, Salem Memorial District Hospital and the Phelps County Regional Medical Center. He earned a bachelor of science degree in pharmacy from the University of Missouri-Kansas City in 1986. Day serves the Rolla community by volunteering for the Community Partnership Board, Phelps County Regional Medical Center Board, Phelps Regional Health Care Foundation Board, the Community Child Care Development Corp., Rolla Regional Economic Commission, Rolla Community Development Corp., the First United Methodist Church, Hypoint Tenant’s Association and the RTI/RTC Advisory Group. He and his wife, Kim, have a son, Bret.

Michael Greenway of Rolla, Missouri, has owned The Grotto, a Rolla-area bar, for almost 16 years. In 2009, Greenway took ownership of the University Book and Supply, a Rolla-area bookstore. The north wall of the building that houses these businesses displays the St. Pat’s sweatshirt design for viewing by the town and campus. Greenway attended Missouri S&T for a portion of his education, and during that time was a member of the St. Pat’s Board. He and his wife, Jaymie, have three children: Jack, Maddie and Sam.  Maddie was a coronation page for St. Pat’s celebrations in 2015.

Louis J. Magdits IV of Rolla, Missouri, is the director of raw materials for Doe Run Co. Magdits’ 37-year professional career includes employment in the lead and battery industries and the past 25 years with Doe Run. His civic service includes his current position as mayor of the City of Rolla, 20 years as an elected city councilperson, board member of the Rolla Regional Economic Development Commission and numerous other boards and commissions. Magdits is also a community mentor for Missouri S&T’s humanitarian engineering and science program. He and his wife, Nan, have been married for 35 years and have three children: Jordan, Louis and Ian.

Joan Nesbitt of Rolla, Missouri, is the vice chancellor for University Advancement at Missouri S&T, a position she has held since 2011. In her role, Nesbitt is responsible for the university’s fundraising initiatives, alumni relations, public radio KMST, and marketing and communications. Nesbitt is an Oklahoma native and a Cherokee Indian whose 27 years in higher education includes 15 years of service at her alma mater, the University of Tulsa, where she earned a bachelor of arts degree in communication. She also earned a master of arts in organizational dynamics from the University of Oklahoma. Nesbitt is a published author, whose essays and poetry have appeared in a variety of electronic and print publications. She and her husband, Doug, have two grown children, Kate and Parker.

Gov. Jay Nixon of Jefferson City, Missouri, was elected Missouri’s 55th Governor in 2008 and re-elected in 2012. As governor, he has supported STEM (science, technology, engineering and math) education in Missouri’s public elementary, secondary and higher education institutions; his work across the aisle to grow the state’s economy helped Missouri in 2014 gain the most jobs in 17 years and bring the unemployment rate to its lowest level in seven years. Prior to serving as governor, he was elected to a record four terms as Missouri attorney general. An attorney with law and undergraduate degrees from the University of Missouri, Nixon’s first experience as a public servant was as a state senator from 1987 to 1992. He is married to Georganne Nixon; they have two sons.

Perrin R. Roller of The Woodlands, Texas, is an engineering and operations consultant for the upstream oil and gas industry. Roller also oversees forensic engineering for accident investigations and organizational and process safety management. He has spent his 35-year career with various subsidiaries of Chevron Corp., with two independent oil companies and as an onshore and offshore consultant in the U.S., North Sea, Brazil, West Africa and Southeast Asia. Most recently he retired as senior vice president of well operations for an independent oil company. Roller earned a bachelor of science degree in geological engineering from Missouri S&T in 1980 and was awarded a professional degree in geological and petroleum engineering from S&T in 1997. He is a licensed petroleum engineer in California, Texas and Louisiana. Roller is a past president of the Miner Alumni Association and a former member of the Missouri S&T Board of Trustees. He is a member of the Academy of Mines and Metallurgy, the Academy of Miner Athletics and the Order of the Golden Shillelagh at Missouri S&T. He and his wife, Brenda, have two children.

Jeff Schrader of Rolla, Missouri, moved to Rolla in 2012 when his wife, Dr. Cheryl B. Schrader, was named chancellor of Missouri S&T. Before moving to the area, Schrader served many years as an attorney, licensed in Texas and Idaho. In his last position, he was legal counsel to the Idaho State Board of Education – the governing board for Idaho’s public education system. Schrader has also served as a public sector lawyer for a variety of government entities in Texas, and in private practice in a firm specializing in bank regulatory law. His first legal position was with Exxon Corp. in Houston, Texas. The Schraders have a son, Andrew, who is pursuing a Ph.D. at Georgia Institute of Technology, and a daughter, Ella. Schrader serves as an ambassador and advocate on the board of directors of CASA of South Central Missouri, the Community Partnership, the Phelps Regional Health Care Foundation and on the selection committee for the Missouri S&T Campus Performing Arts Series.

Dr. Robert W. Schwartz of Columbia, Missouri, serves as interim vice president for academic affairs, research and economic development at the University of Missouri System. Prior to his current role, Schwartz served as interim dean of engineering at the University of Missouri-Columbia and chief-of-staff in the office of the president at the UM System. Before joining UM System in 2012, Schwartz worked for 10 years at Missouri S&T in a variety of leadership positions, including interim provost and executive vice chancellor for academic affairs, vice provost for academic affairs and faculty senate president. Schwartz has also held appointments as professor of materials science and engineering at S&T, associate and assistant professor of materials science and engineering at Clemson University, senior member of the technical staff at Sandia National Laboratories and research engineer at B.F. Goodrich. Schwartz and his wife, Cynthia, enjoy traveling and visiting with family. They are members of the Order of the Golden Shillelagh and have endowed a scholarship at Missouri S&T.