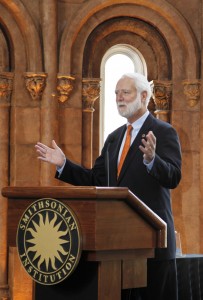 Dr. G. Wayne Clough says that all engineering disciplines will be needed to combat climate change.

A leading voice in the climate change discussion, Dr. G. Wayne Clough, will present the 2016 Stueck Lecture at Missouri University of Science and Technology on Friday, April 22.

Clough, president emeritus of the Georgia Institute of Technology and the immediate past secretary of the Smithsonian Institution, will give a talk titled “Climate Change — An Engineering Grand Challenge for Our Age” at 2:15 p.m., April 22 in Room 125 Butler-Carlton Civil Engineering Hall, 1401 N. Pine St. The event is free and open to the public.

Clough reflects on this issue through the lens of his own experiences beginning with his four-year service as chair of the National Research Council Committee on New Orleans Regional Hurricane Protection Projects and continuing through his observations of the work of hundreds Smithsonian scientists related to climate change. During his six years as secretary of the Smithsonian Institution, he was integrally involved in planning to protect Smithsonian museums and facilities that are at risk from storm surges and sea level rise.

Clough says that within the past five years, a tipping point has been reached regarding climate change: alternative fuels and power sources are becoming cheaper; the 2015 Paris agreement of 195 nations demonstrates worldwide recognition of the problem; and people are realizing that reducing carbon emissions is good for everyone in developed and developing nations.

“This is truly a worldwide mission and will engage all engineering disciplines, not just a few,” Clough says. “It is a golden opportunity for engineering and engineers to use their problem-solving skills to help improve the sustainability of our civilization even as several billion more people are added in the next 50 years.”

He also will give advice about the practical issues and opportunities that are ahead and why he is excited about the possibilities.

Clough served as the 10th president of Georgia Tech from 1994 to 2008 and as the 12th secretary of the Smithsonian from 2008 to 2014. A native of Georgia, he earned his bachelor of science and master of science degrees from Georgia Institute of Technology and a Ph.D. from the University of California-Berkeley. He taught at Duke University, Stanford University and Virginia Polytechnic Institute and State University, where he served as the chair of the department of civil and environmental engineering and dean of the college of engineering. In 1992, he was named provost at the University of Washington.

Clough was elected to the National Academy of Engineering in 1990 and the American Academy of Arts and Sciences in 2010. He was appointed to the National Science Board and the President’s Council of Advisors on Science and Technology by President George W. Bush, and he has received honorary doctorates from 12 universities.

This lecture is presented as part of the Neil and Maurita Stueck Distinguished Lecture Series for Civil, Architectural and Environmental Engineering at Missouri S&T. The series is made possible by a fund established by Maurita Stueck to bring additional outside perspectives to Missouri S&T students, and to honor her late husband, Neil Stueck, a 1943 civil engineering graduate of the university.