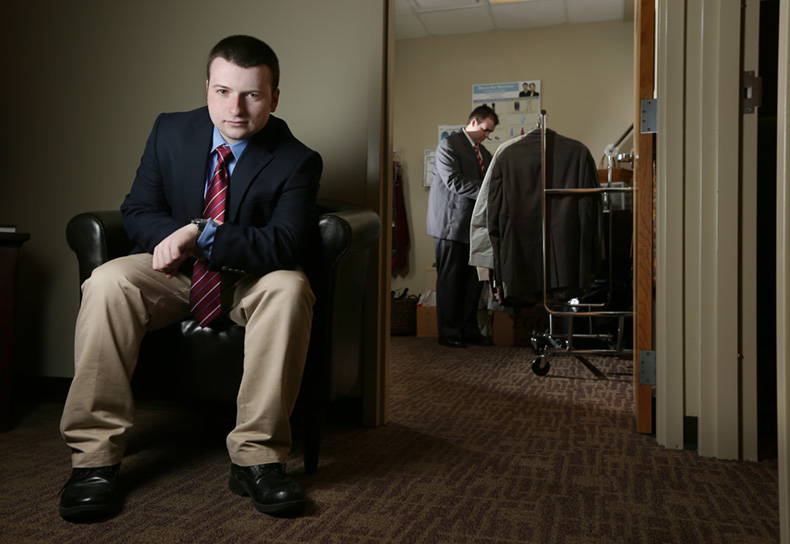 Over 60 button-down shirts, 40 pairs of men’s dress pants, 20 blazers and 10 pairs of dress shoes – that’s the number of clothing items Maureen Harden and her family donated to the Missouri S&T suit closet last summer. Harden’s son, Drew, is a junior in computer engineering and computer science at Missouri S&T.

The suit closet, which operates out of the career opportunities and employer relations office (COER), is like S&T’s very own upscale resale shop, except that everything in the room is free for students to try on and take home.

“If it fits, it’s yours,” says Christian Lehman, student service coordinator and keeper of the closet. “When I tell them that the suit is theirs for free, they do a double take. They’re beside themselves.” COER has even outfitted the bathrooms across the hall from its office on the third floor of Norwood Hall with “dressing rooms” for students, complete with curtains and mirrors.

The suit closet is open 8 a.m.-4 p.m. Monday through Friday, and walk-ins are welcome. COER staff help students with measurements, show them how to tie a tie and offer tips on looking their best.

COER is always looking for professional clothing donations, especially in darker colors like black, dark blue and charcoal, Lehman says, since the closet usually gets cleaned out in the weeks leading up to the career fair. He says COER is also always in need of professional women’s attire.

When Maureen Harden’s father Edward Reardon — Drew’s grandfather — passed away in April 2015, the Harden family traveled to his Charleston, South Carolina, house from their home in Louisville, Kentucky, to clean it up and get it ready to sell. They were amazed by the sheer breadth of clothing Reardon had owned.

“He had all these wonderful pieces of clothing left,” Maureen says. “My sisters and I were going, ‘What do we do with all this stuff?’”

Maureen remembered the campus tour she and Drew had taken the summer before his freshman year.

“I’m going to start crying, but it touched me that S&T, a public institution, had that whole room available for young adults who had needs that they couldn’t fill at home,” Maureen says. “My son went to a high school where he had to wear a tie and a button-down shirt every day of his life, so he has some of those things, but his own roommate didn’t have any of that. Kids are scraping by sometimes just to even get to college. And then they are expected to be fully clothed in appropriate attire, but don’t have the means to pay for that last book they need, much less a blazer.”

COER staff told Maureen, Drew and the rest of the tour group that the suit closet runs off donations. “They said, ‘We know that if you have a need and you use the suit closet, hopefully at some point in your life you’ll remember and return something to it,’” says Maureen.

They had such a large donation that Maureen checked with COER to see if they wanted all the clothes. “Which was of course a big ‘yes,’” says Maureen with a laugh. So they packed up a number of moving boxes and mailed the clothes to S&T. Drew hand-delivered the blazers when he returned to campus last fall.

Maureen wants her story to be just the beginning. “I hope other parents hear this, because it’s parents like us that can help,” she says. “Kids are doing everything they can to put themselves through school, and it’s really great to be able to give them a ‘one-up’ somewhere.”

Dr. Edna Grover-Bisker, director of COER, says donations like the Harden family’s help students succeed at S&T and beyond.

“During the 2014-2015 school year, the suit closet was utilized a total of 448 times by our students,” Grover-Bisker says. “Donations such as this go a long way in helping us ensure our students are prepared for professional life. It is amazing to see the transformation in their confidence and manner when they have suitable professional attire to interview in. It truly makes a world of difference.”