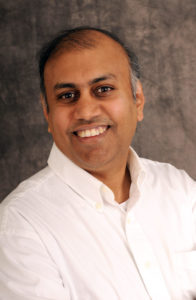 Dr. Jagannathan Sarangapani, Rutledge-Emerson Distinguished Professor of Electrical and Computer Engineering at Missouri University of Science and Technology, has been named a Fellow of the Institute of Electrical and Electronics Engineers.

Sarangapani, who also is the site director for the National Science Foundation Industry/University Cooperative Research Center on Intelligent Maintenance Systems and the director of the Embedded Control Systems and Networking Laboratory, received the honor “for contributions to nonlinear discrete-time neural network adaptive control and applications.”

In simpler terms, “the intelligent control systems — which are modeled after biological systems and human cognitive capabilities — possess learning and adaptation and render optimal performance,” Sarangapani says. “As a result, these so-called intelligent controllers provide hope of improved performance for today’s complex systems. Neural network control in discrete-time is an emulation of brain-based control on embedded computer hardware.”

“Discrete time” means that variables are viewed when occurring at distinct, separate points in time.

Modern feedback control systems have been responsible for major successes in aerospace engineering, automotive technology, energy, defense, space, robotic, healthcare and industrial systems, he says. The function of a feedback controller is to alter a system’s behavior to meet a desired level of performance. More stringent performance requirements in speed and accuracy for uncertain complex systems in unknown environments have challenged the limits of modern control. Operating a complex system in different regimes requires that the controller be intelligent with adaptive and learning capabilities in the presence of unknown disturbances, unmodeled dynamics and unstructured uncertainties.

His research interests include neural network control, adaptive event-triggered control, secure networked control systems, prognostics and autonomous systems and robotics. He has coauthored 137 peer-reviewed journal articles with his students, many in various IEEE Transactions; over 240 refereed IEEE conference articles; six books, with four on neural networks and control and several book chapters. He has received 19 U.S. patents; one patent defense publication with a h-index of 41; and citations of around 6,700 per Google Scholar.

His research interests include neural network control, adaptive event-triggered control, secure networked control systems, prognostics and autonomous systems and robotics. He earned faculty excellence and outstanding teaching awards, and his students won NSF Career awards. He also is a Fellow of Institution of Engineers and the Institute of Measurement and Control, both from the United Kingdom.

Sarangapani’s department now has 10 IEEE Fellows out of 30 tenure and tenure track faculty.

Recognizing the achievements of its members is an important part of the IEEE’s mission. Each year, after a rigorous evaluation procedure, the IEEE Fellow Committee recommends a select group of recipients for elevation to IEEE Fellow. Fewer than 0.1 percent of voting members are selected annually.

On January 12, 2016. Posted in College of Engineering and Computing, Electrical and Computer Engineering, Featured, People