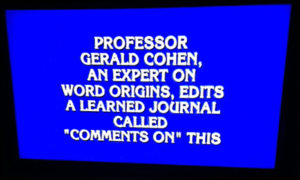 This professor of foreign languages at Missouri University of Science and Technology was a clue this week on the popular TV game show Jeopardy!

Who is Dr. Gerald Cohen?

That’s right. Cohen, a professor of foreign languages at Missouri S&T, earned the distinction of being named in a clue on the Wednesday, Jan. 6, edition of the show. The clue was:  “Professor Gerald Cohen, an expert on word origins, edits a learned journal called ‘Comments on’ this.”

For those of you playing at home, the correct answer is: “What is ‘etymology.’”

Cohen’s journal, “Comments on Etymology,” is published eight times per year. An expert on etymology, or word origins, Cohen writes about the possible or likely origins of words and phrases in the American lexicon, such as “abacus,” “kibosh” and “jazz,” which is the subject of Cohen’s latest book. He also investigates the origins of phrases like “getting down to brass tacks,” “the Big Apple” as a reference to New York City and “Uncle Sam” as a term for the U.S. government.

Cohen wasn’t watching the program when his name appeared. A family friend called him to inform him of the news. Soon after, he received an email from a fellow faculty member, Dr. Kate Drowne, associate professor of English and technical communication and associate dean for academic affairs in the College of Arts, Sciences, and Business at Missouri S&T.

“My reaction was of course complete surprise,” Cohen says. “I didn’t wake up yesterday morning wondering if I’d be on Jeopardy!

“My second thought was, ‘Hey, I could have answered that question.’”

Cohen isn’t the first Missouri S&T faculty member to have a connection to Jeopardy! In March 2013, Dr. Ilene Morgan, an associate professor of mathematics and statistics, appeared as a contestant on the show and finished in second place that day.

One thought on “Missouri S&T professor a clue on ‘Jeopardy!’”