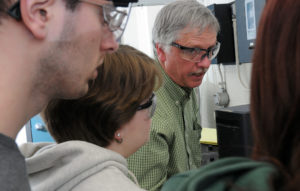 Professor Richard Brow, right, is helping Missouri S&T partner with industry to increase interest and participation in the field of ceramic engineering.

Ceramic engineers help make everything from the casserole dish in the cupboard to artificial joints for hip replacement to coatings that protect jet engine blades — but there aren’t enough ceramic engineers to meet industry needs, says a Missouri University of Science and Technology professor.

Missouri S&T is working to change that.

Missouri S&T is one of five colleges to take part in the Ceramic and Glass Industry Foundation’s (CGIF) University-Industry Network. The CGIF is an outgrowth of the American Ceramic Society (ACS). Dr. Richard Brow, Curators’ Professor of ceramic engineering at Missouri S&T, served as ACS’s president in 2012-13.

The CGIF, Brow says, “is a recognition that ceramic engineering as a stand-alone educational discipline has shrunk over the last 30 years to where there’s very few in the country.”

Missouri S&T produces 25 to 30 ceramic engineers each year, Brow says — about half of what the country as a whole produces. And that’s where the University-Industry Network comes in to encourage materials science and engineering programs around the country to teach key concepts in ceramics and glass science and steer students toward careers in ceramic materials.

The UIN is exactly what it sounds like: a partnership between universities and industries that use ceramic materials. Those industries also include automakers, who need ceramics for catalytic convertors; phone companies, who use glass and ceramic components to generate and transmit information; infrastructure such as steelmakers, who produce metals in refractory-lined furnaces; and electronics manufacturers, who use multilayer ceramic capacitors — more than 1 trillion a year — in televisions, home appliances, cell phones and basically anything that has a circuit.

“Industry needs are not being met,” he says. “There are not enough ceramic engineers left to fill the pipeline, so this partnership is an attempt to attract additional students to the profession and help it grow.”

Students interested in careers involving ceramic materials can come from many other disciplines, such as chemical engineering, materials science and engineering, and chemistry. To connect those students with industry partners, the first five universities participating in the project each name a key professor. Dr. Jeffery Smith, associate professor of ceramic engineering at Missouri S&T, is Missouri S&T’s key professor.

The partnership, Brow says, works to keep S&T’s connections to industry strong and grow the field as a whole.

“Having a key professor through the Ceramic and Glass Industry Foundation at S&T helps our current ceramic engineering program by strengthening the connections of our program to the companies that need our students,” he says. “In addition, having key professors in materials science and engineering programs around the country promoting careers in ceramic engineering will also create new opportunities for our own students and for our alumni already in industry by raising the visibility of the profession.”

Brow says the U-I Network project is based on one the foundry industry pioneered more than 60 years ago. That industry needed engineers to strengthen and expand cast metal capabilities in the United States, so it teamed up with universities to find those engineers. And that helped the industry meet the post-war needs of a growing nation.

“The FEF is our model, and they have shown if it’s not driven by industry, it’s not going to work,” Brow says.

Other universities involved in the project are Alfred University, Pennsylvania State University, Clemson University and the Colorado School of Mines.

On December 11, 2015. Posted in Featured, Materials Science and Engineering, News