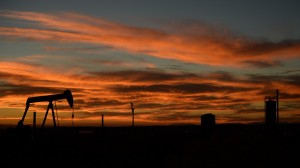 A Missouri University of Science and Technology researcher is working on a method to increase oil production and store carbon dioxide into oil formations — at the same time.

Dr. Baojun Bai, the Lester Birbeck Endowed professor of geosciences and geological and petroleum engineering at Missouri S&T, has received a U.S. Department of Energy grant to make the process of drawing oil from underground and storing CO2  more efficient using thermostable particle gels, which can resist the high temperature of formations.

Typically, water is used to flood an oil well formation to aid in oil recovery. But this method often leaves as much as two-thirds of the oil in a formation behind. Using carbon dioxide (CO2) for enhanced oil recovery is more efficient because CO2 can dissolve into oil, reducing oil viscosity. Currently about 5 percent of the United States’ oil production relies on CO2 flooding — but using CO2 comes with problems.

Formations are not uniform. Areas and layers allowing oil to pass through easily (high permeability) are interspersed with areas and layers where oil passes through less easily (low permeability). Injected CO2 flows through areas of high permeablity but leaves a lot of oil unswept in areas of low permeablity, Bai says. The differences in viscosity between the injected CO2 and oil can cause the CO2 to seep through fingers-like channels in the formation; the carbon dioxide that’s produced reduces the efficiency of the greenhouse gas storage in formations.

“Injecting particle gels into CO2 flooding formations is a win-win method because particle gels can not only help increase oil recovery, but it also can help keep CO2 contained in the formation and thus increase greenhouse CO2 storage efficiency,” Bai says. “Storing the carbon dioxide underground is environmentally friendly because it keeps the gas out of the atmosphere.”

Gels can be injected into wells to reduce CO2 production and increase oil recovery when CO2 is produced with oil from production wells. Traditionally, the in-situ gels that are formed in formations due to increased temperatures are used to reduce injected fluid — water and CO2 — from production wells. To avoid the disadvantages inherent in these in-situ gels, Bai and his group developed preformed particle gels, which are formed under surface conditions, to reduce water production from water flooding reservoirs. Since 1999, this technology has been successfully used in more than 5,000 wells to control water flooding, and Bai has won three DOE projects with a total budget of nearly $3 million to understand how the particle gels can better help reduce water production from water flooding formations.

The award focuses on creating thermostable particle gels that can resist CO2 acid for extended periods of time, keeping  CO2 safely stored on the subsurface.

“We expect the novel particle gels will be environmental friendly, in sizes ranging from a nanometer to a few millimeters, and can be stable under reservoir temperatures for more than one year,” says Bai, who received $990,575 from the DOE for the project “development of swelling-rate-controllable particle gels to enhance CO2 flooding sweep efficiency and storage efficiency.” Missouri S&T provided an additional $249,821, making the total project worth $1.24 million.

Bia is collaborating with Dr. Mingzhen Wei, an assistant professor of petroleum engineering at Missouri S&T, who will be responsible for optimizing the experiment’s designs.

Bai joined the Missouri S&T faculty in 2006 and was promoted to full professor this year.