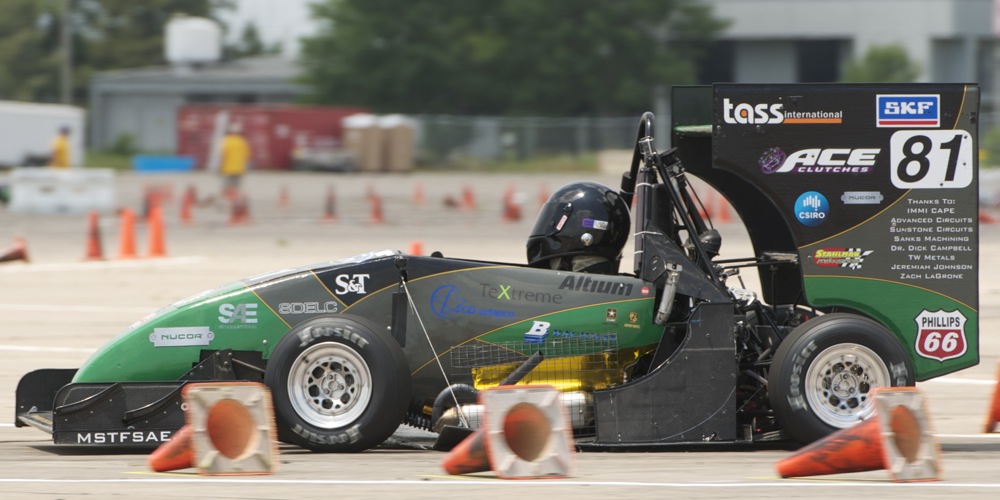 The Formula SAE car in action. Photo by Bob Phelan. 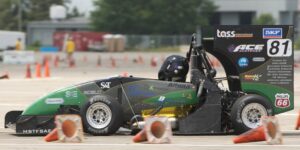 The Formula SAE car in action. Photo by Bob Phelan.

The two competitions, which were held June 17-20, at the Lincoln Airpark in Lincoln, Nebraska, challenged students to design, build and operate small-scale racecars. The competition featured two separate categories – one for traditional combustion engines and one for fully electric vehicles.

As part of the competition, students had to present a budget report and the engineering principles behind each car’s design to a panel of industry experts. The electric team also had to pass a rigorous electronics inspection to ensure the car’s safety. Teams then had to compete in four dynamic events.

A skid-pad event tested the car’s turning and cornering on a figure-8-shaped course. An acceleration test measured the car’s speed over a short distance. A one-lap autocross event proved the car’s maneuverability on a tight course and determined the starting order for the final event – an endurance race to prove durability. In the endurance race, the car had to withstand the stress of long-term driving at elevated speeds over long course. Each race was timed to rank the teams; none of the events were head-to-head races.

Missouri S&T’s Formula SAE-Electric team earned third in cost efficiency, eighth in presentation and tied for fourth in design.  The team was assessed zero penalties for safety infractions. The electric-based team did not compete in the driving portion of the competition because of electrical system problems, but still earned enough points for fifth place.

The Formula SAE Electric Team’s car has a student-made steel chassis, a fiberglass protective shell and a student-designed suspension system. The car’s battery pack, which is water-cooled, features 72 lithium battery cells split into three groups, each producing 90 volts. It can produce a maximum voltage of almost 300 volts and a current of nearly 200 amps.

The combustion-style Formula SAE car features a modified Kawasaki engine that can produce up to 91 horsepower for the 450-pound vehicle. The car is estimated to travel from 0 to 60 miles per hour in 3.5 seconds. Its custom aerodynamics package produces a large amount of downward force and is designed to help the tires grip the track better. In May, the combustion-style team earned 15th place at the Formula SAE-Michigan competition.