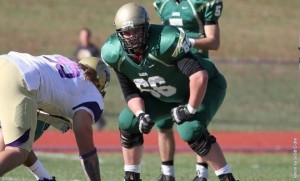 Forrestal Hickman, a four-year starter on the Miners’ offensive line, has signed as a free agent with the San Diego Chargers.

Forrestal Hickman, a three-time all-conference offensive tackle at Missouri S&T, has signed a free agent contract with the San Diego Chargers of the National Football League.

Hickman (Holton, Kan./Holton High School) was a four-year starter on the Miners’ offensive line at the left tackle position, where he earned first-team all-league honors from the Great Lakes Valley Conference following the 2014 season.  He was also a first-team All-GLVC selection in 2012 – when the Miners finished with a 10-1 record – and was a second-team pick the following year.

In the 2014 season, Hickman served as the leader for an offensive line unit that had as many as three freshmen in the lineup at times.

Hickman received non-drafted rookie tryouts with the Cincinnati Bengals and the Chargers this spring before signing with San Diego late Monday night.