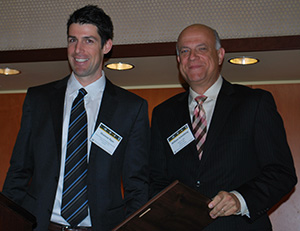 Dr. William P. Schonberg, chair and professor of civil, architectural and environmental engineering at Missouri University of Science and Technology, has been selected as the recipient of the 2015 Distinguished Scientist Award from the Hypervelocity Impact Society. He was selected for his leadership, innovation, and technical excellence in hypervelocity research.

The Distinguished Scientist Award is presented at the society’s bi-annual symposia to an individual or research team for significant and lasting contributions to the field of hypervelocity science. Schonberg will also become an Honorary Member of the Society.

The criteria for selection include importance and scope of technical accomplishments as well as service to the Hypervelocity Impact Society.

In addition to co-chairing this year’s Hypervelocity Impact Symposium, Schonberg also co-chaired the 1998 symposium, served as the society’s president and secretary-treasurer, and chaired the Society’s Educational Outreach and Publications Committee. He was the guest editor for the special issues of the International Journal of Impact Engineering that published the proceedings of the past few symposia. As Educational Outreach Committee chair, Schonberg was responsible for administering the Alex Charters Student Scholars program, which provides financial support to students who attend the symposia.

Schonberg is a registered professional engineer in Missouri and Alabama, and has nearly 30 years teaching and research experience in the areas of shock physics, spacecraft protection, hypervelocity impact and penetration mechanics. He earned a bachelor of science degree in civil engineering from Princeton University in 1981, and earned master of science and Ph.D. degrees from Northwestern University in 1983 and 1986, respectively.

His research has been applied to a wide variety of engineering problems, including the development of orbital debris protection systems for spacecraft in low earth orbit, kinetic energy weapons, the collapse of buildings under explosive loads, insensitive munitions and aging aircraft. His scholarly activities are supported by contracts and grants from a variety of federal, state, local, and private funding agencies, including NASA, the National Science Foundation, the U.S. Department of Transportation, the Air Force Office of Scientific Research, the Army Research Office and Sandia National Laboratories.

At Missouri S&T, Schonberg teaches a variety of graduate and undergraduate courses in civil, mechanical, and aerospace engineering. He has been department chair and interim dean of engineering at two different universities and in 2007 he was honored with the University of Missouri System’s Manuel T. Pacheco Award from the President’s Academic Leadership Institute (PALI). This award honors an academic administrator who exemplifies outstanding academic leadership at one of the four institutions within the University of Missouri System.

Schonberg is a recipient of the AIAA’s Lawrence Sperry Award for his work on the design of spacecraft protection systems and the Charles Beecher Prize from the Aerospace Sciences Division of the Institute of Mechanical Engineers in England, and is a Fellow of the American Society of Civil Engineers and the American Society of Mechanical Engineers. He has served on numerous National Academy of Engineering/National Research Council technical committees that have reviewed key technical issues related to the United States’ space exploration programs and in 2007 Dr. Schonberg received a Friedrich Wilhelm Bessel Research Award from the Humboldt Foundation in Germany. This award enabled him to spend seven months at the Fraunhofer Ernst Mach Institute in Freiburg, Germany, working on advanced protection systems for satellites and developing preliminary designs for safe lunar habitats using in-situ materials for protection against meteoroid impacts.

On May 4, 2015. Posted in Civil, Architectural and Environmental Engineering, College of Engineering and Computing, Featured, People

One thought on “Schonberg selected for 2015 Distinguished Scientist Award”