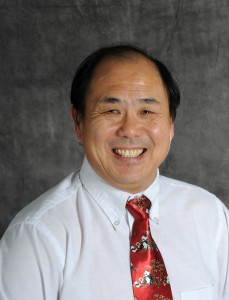 Researchers at Missouri University of Science and Technology have developed a probe capable of detecting signs of disease or environmental change inside a single human cell.

Dr. Yinfa Ma, Curators’ Teaching Professor of chemistry, and Dr. Honglan Shi, associate research professor of chemistry at Missouri S&T, worked with colleagues at Clemson University to develop a single-cell analyzer that can be used for research and many other applications.

“It’s a novel design,” Ma says. “Everybody would like to see what’s going on in one cell – but how?”

With a collaborative effort, the team figured out how — and they applied for the patent in October 2014.

To detect changes when a single cell is exposed to external variations caused by disease or environmental changes, the team developed an optic-fiber probe with hexagonal strands surrounding a center fiber. Imagine a doctor’s needle, and then scale it way, way down so the tip is 2 to 5 microns in size. When inserted into a cell, the probe’s fluorescent nanomaterial-doped tip is used to detect either its pH change or corresponding temperature change.

“The pH change can come from the cell being under stress or exposed to harmful outside environmental factors such as drugs or toxic nanoparticles,” Ma says.

The six strands surrounding the central fiber detect changes in the cell’s reflected fluorescent signal when hit with a laser source attached to the probe. Data is collected using a detection device. Researchers then calculate the ratio in two ways: one looks at the peak fluorescent intensity and the reference intensity; the other measures the decay time of the phosphorescence, which is then calculated and correlated with the pH or temperature values.

As a cancer researcher, Ma is excited about how the single-cell research can advance knowledge in that field and others.

“Comprehensive understanding of a single cell in response to its biological environment and stimuli is becoming the foundation of many biomedical research fields, including drug development, nanotoxicity study, biomarker discovery, cancer diagnosis and treatment and many other areas,” Ma says.

On May 28, 2015. Posted in Department of Chemistry, Featured, News, Research, Science & Tech