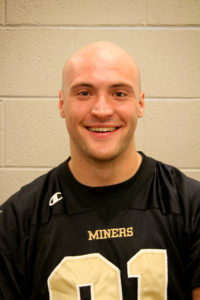 UPDATE (Sunday, May 17, 2015): The U.S. military joint task force in Okinawa, Japan, has confirmed the identity of Capt. Norgren and all other crew members.

Marine Capt. Chris Norgren, a 2007 graduate of Missouri University of Science and Technology who has been identified as the pilot of a military helicopter that crashed in Nepal while on a humanitarian aid mission, is described by members of the campus community as an academically gifted and service-minded student.

“Our prayers and thoughts are with Chris’s family and loved ones at this time, as well as with the families and loved ones of every helicopter crew member,” says Dr. Cheryl B. Schrader, chancellor of Missouri S&T. “As a student-athlete and a member of two student design teams, he was committed to working with others to find the best possible solution to any situation – whether on the playing field or in the lab. It is no surprise to us that he was working in service to others at the time of the crash.”

The parents of Norgren, a Marine captain from Wichita, Kansas, have identified him as the pilot of a UH-1 Huey helicopter that was delivering humanitarian aid to a region of Nepal that was devastated by a series of earthquakes that began on April 25. Five other U.S. Marines and two Nepali military service members were aboard. The helicopter lost contact near the earthquake’s epicenter on Tuesday, May 12. Pentagon and Nepali officials confirmed on Friday, May 15, that the wreckage had been found in the Gorthali area, at an altitude of 11,200 feet. Nepal’s army said in a statement today (Saturday, May 16) that the bodies of all eight people on board had been recovered.

“Chris was a first-rate young man,” says Dr. Henry Pernicka, associate professor of aerospace engineering and an advisor to the university’s M-SAT team. Pernicka described him as a “nearly straight-A” student. “He took four courses from me and was on my satellite research team, and he performed highly in all of these.”

On May 16, 2015. Posted in Department of Mathematics and Statistics, Featured, Mechanical & Aerospace Engineering, News