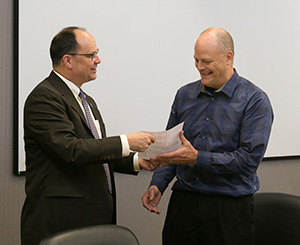 Dr. Joel Burken, professor civil, architectural and environmental engineering at Missouri University of Science and Technology, has been awarded the 2015 University of Missouri System President’s Award for Service. The recognition includes a $5,000 award.

The UM System President’s Awards are presented annually to faculty members across the four UM System campuses who have made exceptional contributions in advancing the mission of the university and its campuses. Ten awards will be presented this year.

Missouri S&T Provost Robert Marley surprised Burken with the award on Monday, April 27. UM System President Tim Wolfe will formally recognize Burken and the other award recipients during a celebration on June 25.

Burken joined the Missouri S&T faculty in 1997 as an assistant professor of civil engineering. Since that time, he has established a strong record of campus and professional service. He has served on more than 20 university and department committees, as president of the Association of Environmental Engineering Science Professors, as a founder and vice president of the International Phytotechnologies Society, as chair of the campus promotion and tenure committee, and as master of ceremonies and host for campus recruitment events.

“I remember Joel’s service on the department’s curriculum committee at a time when numerous changes were debated and needed to be implemented,” wrote one nominator. “His leadership and hard work resulted in the creation of not only a more streamlined curriculum for our students, but one that was also responsive to alumni and employer feedback and needs.”

Burken established the bachelor of science in environmental engineering program as well as a minor in sustainability and a minor in global studies. In 2009, he established the Green Campus Committee, now known as the Strategic Sustainability Planning Committee, and led its initial course of action. The committee’s work has resulted in several campus improvements, including campuswide energy audits, a restructuring of the campus environmental management system, reductions in campus paper use fostered by print quotas, and a restructuring of campus solid waste programs.

In addition, Burken worked to establish the Chester and Evelyn Baker Greenhouse, a unique research and education facility funded in part by a $100,000 donation from 1955 Missouri S&T civil engineering graduate Chester Baker. The facility is enhanced by research instrumentation acquired through an NSF grant. He also led efforts to establish a green roof research facility that provides opportunities for research and education in the study of urban stormwater quality and urban heat islands.

In 2013, Burken was named director of Missouri S&T’s Environmental Research Center, where researchers study the effects of contaminants in natural and engineered systems.

Burken received the Rudolph Hering Medal by the American Society of Civil Engineers in 1998 and 2007. In 2000, he received a faculty early career development award from the National Science Foundation. He also has received S&T’s Faculty Excellence Award six times, and in 2012 received the Alumni Merit Award from Missouri S&T’s Miner Alumni Association.