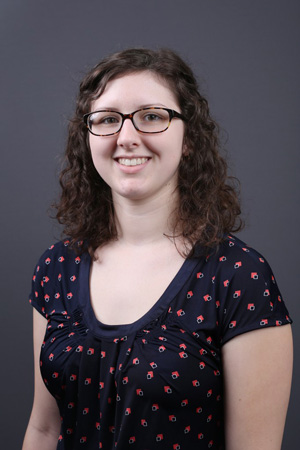 Ariel Donovan, a Ph.D. candidate in chemistry at Missouri University of Science and Technology, was recently honored by the American Chemical Society for her undergraduate research into the removal of lead and other heavy metals from water.

Donovan earned the 2014 Undergraduate Award in Analytical Chemistry, which recognizes students’ merit in the analytical chemistry field. The award, which includes a medal and a certificate, is intended to encourage students to continue working in the field. Donovan was nominated for the award by her advisors, Dr. Honglan Shi, associate research professor of chemistry at Missouri S&T, and Dr. Yinfa Ma, Curators’ Teaching Professor of chemistry at Missouri S&T.

During her undergraduate studies, Donovan, a native of Raymore, Missouri, worked to develop an agricultural byproduct-based adsorbent to remove heavy metals from water. She used soybean hulls because of their abundance and limited current uses. The modified hulls remove most of the toxic heavy metal elements, including lead, from water. The heavy metal is one of the most commonly found pollutants throughout the state as a result of mining.

“Ariel has done well in both class and research during her undergraduate studies,” says Shi. “She not only performed well for her two awarded OURE (Opportunities for Undergraduate Research Experiences) projects, but also actively participated in federally- and industry-funded drinking water research projects. These include projects funded by the U.S. Environmental Protection Agency, Missouri Department of Natural Resources and Tulsa Metropolitan Utility Authority during her undergraduate studies at Missouri S&T.”

On January 23, 2015. Posted in Alumni, College of Arts, Sciences, and Business, Department of Chemistry, People