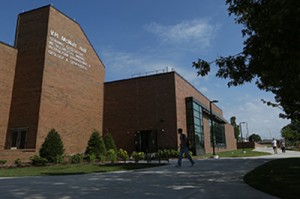 Missouri University of Science and Technology will host a ribbon-cutting ceremony to celebrate the completion of its geothermal energy system on Thursday, Nov. 6. The project, which began more than four years ago, is one of the most comprehensive projects of its kind ever undertaken by a college or university.

The public is invited to attend the ceremony, which will be held at 4 p.m. Thursday, Nov. 6, on the lawn adjacent to the east side of McNutt Hall on the Missouri S&T campus. That portion of McNutt Hall showcases a fully operational geothermal energy plant. Tours of the facility will be available following the ceremony.

“This provides a great opportunity to show our campus and community that we are a sustainable campus, focused on improving our energy efficiency and reducing our environmental impacts,” says Angie Rolufs, director of the office of sustainable energy and environmental engagement (OSE3).

“The ribbon-cutting is an opportunity to thank the campus community for their patience during the construction projects over the past three years, and to celebrate the tremendous efforts by the many people involved in bringing the projects to a successful conclusion,” says James Packard, director of facilities operations at Missouri S&T.

The ribbon-cutting ceremony is the main event of a larger celebration called Campus Sustainability Day. Held on the McNutt Hall lawn from 11 a.m.-2 p.m., the event showcases the sustainability efforts of many of Missouri S&T’s departments and student organizations. Tours of the McNutt Hall geothermal plant will be available. Refreshments will be served.

The geothermal system is expected to cut the university’s annual energy use by 50 percent and reduce its carbon footprint by 25,000 metric tons per year. That reduction amounts to roughly the equivalent of the greenhouse gas emissions of 4,600 passenger vehicles a year. The geothermal system will also reduce Missouri S&T’s water usage by over 10 percent, or 10 million gallons per year, and eliminate a $34 million backlog in deferred maintenance costs for the aging power plant.

“Significant energy savings and sustainability gains have been accomplished,” says Packard. “The geothermal project has also been leveraged to make improvements to the infrastructure and systems throughout the campus, resulting in an overall reduction of the deferred maintenance backlog by over $60 million, a 27 percent reduction. This has been accomplished with existing resources available to the campus.”

The geothermal project was approved by the University of Missouri System Board of Curators in 2010. Following an April 2012 groundbreaking ceremony, construction began in May 2012 with the drilling of 790 ground-source wells around campus.