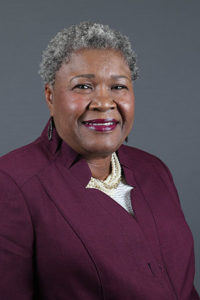 Shenethia Manuel, associate vice chancellor of human resource services, Affirmative Action, diversity and inclusion at Missouri University of Science and Technology, has been elected to the executive committee for the Commission on Access, Diversity and Excellence (CADE), a commission of the Association of Public and Land-grant Universities (APLU).

Manuel was elected to a three-year term on the commission during APLU’s annual meeting, held Oct. 31-Nov. 2 in Orlando, Florida.

As a member of the CADE executive committee, Manuel will be involved in developing a comprehensive agenda regarding the relationships between public higher education and the issues of human resources and social change. The commission focuses on such major issues as the broadening of access and opportunity to higher education; using the diversity of the undergraduate experience to prepare graduates for the future; enhancing diversity within student and faculty populations; and creating partnerships between universities and local and world communities to bring about beneficial social change.

Manuel joined Missouri S&T in 2008 and has served as associate vice chancellor since 2010. She is responsible for S&T’s human resources, diversity and inclusion initiatives; Affirmative Action and Equal Employment Opportunity oversight and planning; and oversight of the university’s Title IX compliance. She also serves as the liaison to the Chancellor’s Advisory Committee on African American Recruitment and Retention and serves as chair of the Chancellor’s Committee on Diversity and Inclusion.

As a CADE executive committee member, Manuel also serves on the planning committee for the 2015 National Access, Diversity and Excellence Summit, which will be held next August.