‘A Christmas Carol’ to be performed at Missouri S&T 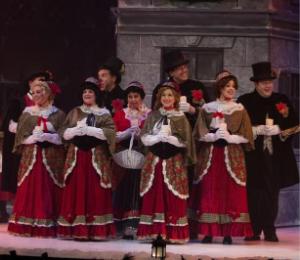 The holiday classic, Charles Dickens’ “A Christmas Carol,” will be performed at Missouri University of Science and Technology this December as part of Missouri S&T’s 2014-15 Leach Theatre Family Series.

The show, produced by Palace Theatre, will be performed at 7 p.m. Monday, Dec. 8, in Leach Theatre of Castleman Hall, 10th and Main streets in Rolla.

“A Christmas Carol” is the story of the unrepentant and miserly Ebenezer Scrooge, who has a change of heart after being visited by the ghosts of his Christmases past, present and future.

The new adaptation of the story, presented by Palace Professional Tours, fills the stage with lush costumes, stunning sets, music and dance while leaving the message of the story unchanged. Area children who auditioned will participate as extras in the performance.

Tickets are $18 for the general public and $12 for Missouri S&T students with a valid ID. Tickets are available online at leachtheatre.mst.edu/familyseries/14-15/achristmascarol/. Tickets can also be purchased 9 a.m. to 4 p.m. Monday through Friday from the Leach Theatre Box Office, located in the vestibule inside the main entrance to Leach Theatre, facing 10th Street.