S&T Mars Rover Team is second in the world 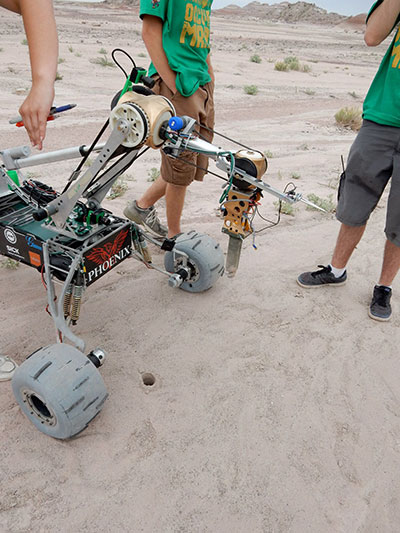 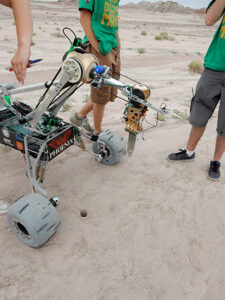 The Mars Rover Design Team at Missouri University of Science and Technology took second place in an international competition that challenges college students to design and build the next generation of Mars rovers.

Twenty-three teams from around the world competed in the University Rover Challenge, sponsored by the Mars Society, May 29-31 at the Mars Desert Research Station in Hanksville, Utah. The Hyperion Team from the Bialystok University of Technology in Poland took first place.

This is the second year Missouri S&T’s Mars Rover Design Team competed in the University Rover Challenge. In 2013, the team placed last.

“The team expected to perform well during this year’s competition, but did not expect to reach a second-place showing,” says Dr. Melanie Mormile, professor of biological sciences at Missouri S&T and team advisor. “The team built an awesome rover.”

Missouri S&T’s Mars Rover, named Phoenix, is a student-designed and -built remote-controlled robotic rover with almost no off-the-shelf hardware or parts. The team developed custom circuitry for the rover, machined the aluminum and carbon-fiber support structure, had the frame cut using water-jet technology at Missouri S&T’s Rock Mechanics and Explosives Research Center and 3-D printed the gears and drill bits used in the rover’s arm.

Missouri S&T’s team tied for first place in terrain traversing, in which the team must maneuver its rover across the rocky Utah terrain on a course designed to simulate the surface of Mars.

S&T took second place in both equipment servicing – a maintenance task designed to remotely repair broken parts; and in sample return – a task that requires the rover to collect and return soil samples from the course.

“The team displayed amazing cooperation,” Mormile says. “Everyone knew their functions and were also there to lend a hand as needed. It was a winning combination. The team is already aiming for first place next year.”