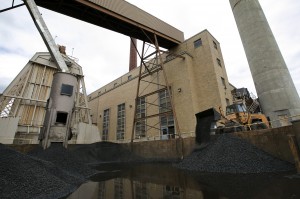 The coal-fired power plant at Missouri S&T has served the campus for nearly seven decades.

A World War II-era power plant that has provided energy to much of the Missouri University of Science and Technology campus for nearly seven decades is powering down as the university makes the transition to a geothermal energy system.

The power plant, which was constructed in 1945, burned coal and wood chips to provide steam to much of campus for the past 69 years. The plant’s boilers were permanently shut down on Wednesday, May 21.

By the fall of 2014, Missouri S&T’s geothermal energy system – one of the most comprehensive ever undertaken by a university – will be fully in service. It will provide heating and cooling to 17 buildings on campus and chilled water to the majority of campus buildings.

The geothermal system consists of three separate plants that will distribute energy from the system to different parts of campus. Over the summer, a fourth facility will be completed to provide heating and cooling to the Gale Bullman Building at 10th Street and Bishop Avenue. 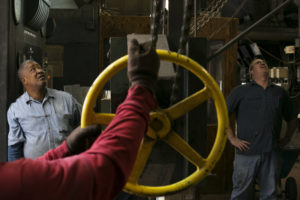 The heat recovery chillers of the three main campus plants have been operating since early April, and the system is providing heat to six buildings on campus. Since mid-April, the system has also provided the majority of the chilled water supply used for air conditioning on campus, says James Packard, director of facilities operations at Missouri S&T.

“The number of buildings being served by the geothermal system will probably double within a week,” when one of the geothermal plants begins to produce hot water as part of the start-up and commissioning of that plant’s systems, Packard says. That plant is located in James E. Bertelsmeyer Hall, the new chemical and biochemical engineering building under construction at 11th and State streets.

When completed, the geothermal system is expected to cut the university’s annual energy use by 50 percent and reduce its carbon footprint by 25,000 metric tons per year. That reduction amounts to roughly the equivalent of the greenhouse gas emissions of 4,600 passenger vehicles a year. The geothermal system will also reduce Missouri S&T’s water usage by over 10 percent, or 10 million gallons per year, and eliminate a $34 million backlog in deferred maintenance costs for the aging power plant.

The geothermal project was approved by the University of Missouri System Board of Curators in 2010. Funded through the sale of bonds by the university, the system is expected to save more than $1 million annually in energy and operational costs. That savings is expected to grow to $2.8 million a year. The university plans to repay the debt over 30 years through savings from the project.

Construction of the geothermal system began in May 2012 with the drilling of ground-source wells around campus. Pipes were installed in the wells and connected to create closed geothermal loops dedicated to each of the plants. “Those plants produce and export heating water to campus buildings through a new heating hot water distribution system and produce and export chilled water for cooling through a reconstructed chilled water distribution system,” Packard says.

The system allows energy to be stored in and reclaimed from well fields around campus. Approximately 790 wells will serve the geothermal plants.

Three of those plants are centrally located on campus in Straumanis-James Hall, McNutt Hall and Bertelsmeyer Hall. They each contain heat recovery chillers, supplemental cooling towers and gas-fired boilers to provide geothermal energy to surrounding areas of campus. A fourth geothermal system will serve the Gale Bullman Building, which houses athletics and student recreation at 10th Street and Bishop Avenue.

Stand-alone equipment will be housed in the remaining campus buildings that were heated by steam from the power plant. Physical facilities staff and contractors will continue to install heating, ventilation and air conditioning systems in campus buildings over the summer, Packard says.